There’s a new 3D FPS game out on the market called WWII: D-Day which is very Counter-Strike-ish by developer 3D Studio who has come out lately with a lot of 3D FPS games. This game is an online multiplayer game with 2 dedicated servers for online play.

Much like CS and other FPS games you choose between two teams, in this case the Axis or Allies.

Some other features include:

– Arguably the most spectacular 3D graphics for Android ( developer’s claim, not Droid Gamers. We have yet to give this a try)

It’s good to see more 3D games coming out across all genres of gaming for Android. This game however is only compatible with the Droid or Nexus One (and probably any newer high end phone that will be released in the future). So if you have a Droid or a Nexus One and feel like you want to get your FPS multiplayer fix, give this game a shot.

It’s available on the market for $4.99. Instructions for controls are also available at the official D-day website. 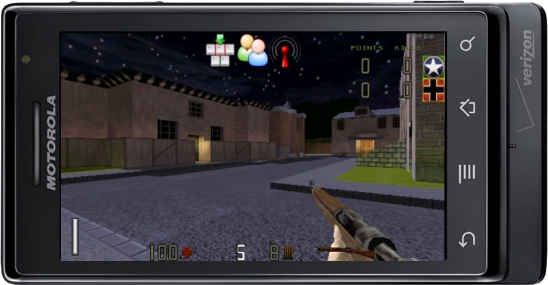