It seems today is filled with all sorts of retro goodness for some reason. Kamyran’s Eye by PHK is a very retro looking “rogue-like” RPG (think even before the original Final Fantasy). One cool feature is that every time you play the game, the world changes a little bit so it’s never quite the same each time.

Kamyran’s Eye has actually been out since roughly Sept. of 2009 so it’s not a new release by any means and is sort of an underground title when it comes to Android games.

Honestly, the graphics are mediocre at best, which is fine since it’s so retro looking, it’s not like games back in the day even had awesome graphics compared to now. The game play and the game in general however more then makes up for the graphics though. This is probably one of the only RPG games to survive through 2009 and not fall off the map which is impressive considering it has less then 500 downloads! 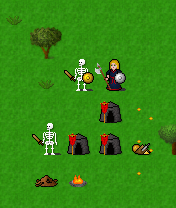 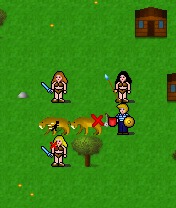 There are a ton of items, weapons and skills and a lot to do in this game since you can explore just about anywhere at anytime. It also has multiple different ending to the game depending on what you do so there is a lot of replay value to this game.

If you like your RPG games and still enjoy playing the older RPGs from back in the day then you’ll enjoy this game a lot. It’s got a lot of positive feedback on the market and comes in both a Lite and Full version and still receives updates. The developer has a Kamyran’s Eye 2 listed on his website so hopefully we will see that drop on the Android market in the near future.