While I was checking over my usual Android news websites that I go to every morning for good reading while drinking coffee I stumbled onto a forum post over at Android and Me about a game called iDracula by Chillingo. Saw the screens of it and it got my interest so I downloaded it onto my G1 to give it a whirl. iDracula is a top-down shooter game with power-up and all sorts of goodies.

I read the comments in the Android market before checking this game out and a lot of people were complaining about the controls to this game. Stubborn as I am, I downloaded it anyways because the screen shots really compelled me to….I was pleasantly surprised at how enjoyable this game actually is.

You’re a Vampire Hunter and you have to kill onslaughts of monsters such as Werewolves, Vampires and all sorts of stuff until you get to Dracula himself. The graphics are pretty impressive keeping to the standard top-down style of graphics (like Diablo 2 for the PC). There are all sorts of weapons you can pick up and health packs along with other buffs. Personally I’m partial to the rifle and crossbow so far.

There are four different styles of game play: Rush, Wave Attack, Survival and Super Survival. Each one presents you with a different style of game play, most of which are pretty self explanatory by their names. There is also three stages to choose from although in the free version you only have access to one stage  and Survival Mode. In total there are 8 different weapons, 3 stages, 4 game play types and a ‘Perk’ system which means you gain perks as you gain experience.

I can see where people would find the controls really difficult to use at first but honestly after a few minutes of playing I had them down and was kicking some serious monster ass. You can also customize the controls and the overall UI like hiding the direction wheels and such in the Options. The best way to play this game is to realize you tilt to move your guy and use the left wheel for aiming and shooting. It’ll seem a bit odd at first but the way I overcame it is by just keeping your finger in the center of the left wheel (which shoots your weapon) and just rolling my thumb in the direction I want to point my weapon while tilting the phone to move. The game play is pretty fast and furious. 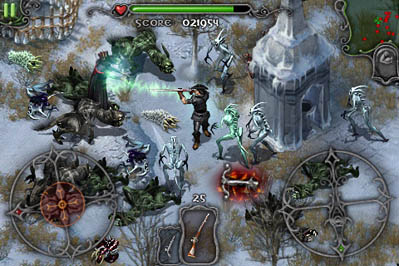 If you like Top-Down shooters then this will definitely be a game you’ll enjoy and I’d love to see multiplayer come to it in a future update. Give the free version a try before buying the full version though to make sure you’re alright with the controls, I’m sure they’ll be improved a bit in a future update but again, after a few minutes I had them down pretty good. Aiming/shooter could use a bit of a touch-up though. Now Chillingo just needs to release the rpg SEED 1.

One last note though, this game currently does NOT support the Nexus One so I’m assuming it doesn’t support Android 2.1…yet.

Source Referenced: Android and Me Forums