I’ve been keeping my eye on this tower defense game since it’s official (non-beta) release a little over a month ago and seen it’s popularity grow substantially. Tower Raiders GOLD (also a Black version for pre-2.0 Android devices) by Gianormous Games calls itself the best Tower Defense game for Android and they could very well be right.

Tower Raiders Black is a ‘night time’ version of the game for pre-2.0 Android devices. Taking a look at it, it just seems the graphics are toned down so that the older gen devices can play it well which isn’t a bad thing since Tower Defense games are more about game play then eye candy (although there’s nothing wrong with a little eye candy).

Tower Raiders GOLD for the Droid/Nexus/Newer phones has HD graphics to compliment the great game play which makes it a whole lot better since the Black version would probably look weird for our newer phones. The full version of Gold has 24 levels and of course all the towers available. Black will probably have a similar number of levels in it as well although I don’t have a copy of Black to play with right now.

So far I’ve been playing the free version of GOLD on my N1 and am really enjoying it a lot. It’s already shot up into the Top 5 Paid games sitting in 3rd place with a 5/5 star rating. Could this be the tower defense game to knock Robo Defense out of the #1 position after soooooo long? Who knows but it’s definitely a contender.

I plan to get the full version of GOLD and do a more thorough, official review after giving the full version some good game time. You can pick up GOLD for $4.99 on the Android market, Black for $3.99 and both have free demo versions available for trying out. 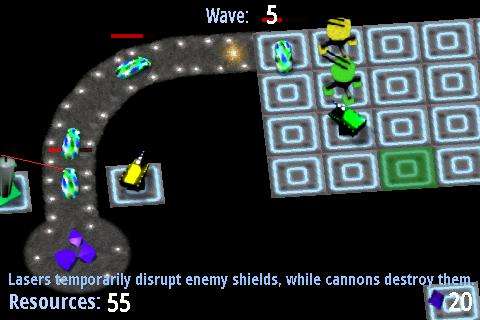