You control your little paper plane by tilting your phone and steering towards obstacles to gain points and avoid crashing. You also have 3 boosts you can use for accelerated speed and height climbing. The graphics are actually really good, they are your standard 3D block-ish type graphics that tend to really enhance the ‘3D’ part of the game. 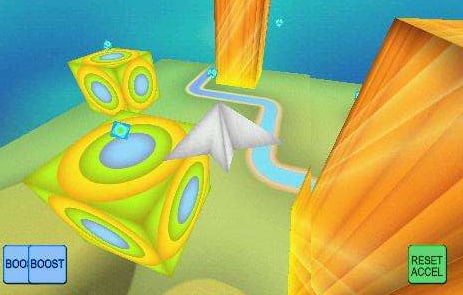 After giving it some play time I did find this actually entertaining, especially since the levels are dynamically generated so they are slightly different every time. The controls to me need some improvement. I had some steering problems even after doing the suggested ‘Reset’ that they tell you to do in the beginning before you start playing, maybe that was just me though.

My Paper Plane is by the same developer, Wavecade,  who released Pokanoid if any of you are familiar with that game. Overall My Paper Plane is a pretty decent time waster and entertaining as long as you don’t have any difficulty steering like me. Give it a shot if you like flight simulator type games.