Our friends over at OrangePixel sent us a copy of their persistent scrolling platform game called DynamoKid Touch to review last week. As with all of our full reviews, we like to take our time playing the game giving it some good gameplay before coming up with our final verdicts. After playing this game for about a week I will say this: Addicting.

Gameplay: In this game you are DynamoKid running your butt off constantly. The background of the game is a piece of paper with landscape sketched onto it which looks really good but also plays a part in the game because as you run along each stage you have to tap various elements to fill them in so you can continue running such as little pieces of rocks. As you run through each stage you want to collect as many stars as you can including super stars which, like the landscape, you have to fill in to make them drop so you can collect them as you run by. However everything isn’t as easy as it sounds…

You have moving platforms to jump onto, other rock areas will drop out from beneath you, boulders dropping down, enemies running at you or floating above you dropping bombs. Tapping is your main weapon here and you have to be quick on the draw (pun intended) when it comes to the enemies and falling rocks. Tap an enemy running at you to destroy him or the floating ones to shoo them away. Tap a boulder to destroy it and keep your little DynamoKid safe. Of course you have to do all of this while collecting stars, jumping platforms (moving or not) and filling in other parts of the landscape. Just to make sure you don’t memorize each stage, they are dynamically made every time you start over so they are never the same. 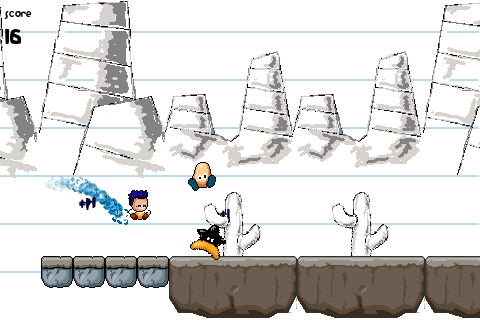 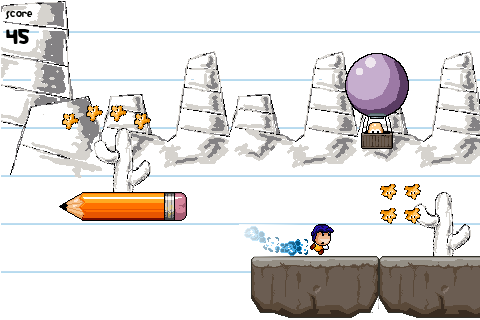 Controls: As mentioned already, all you have to worry about is tapping, a lot of tapping. The response time is pretty much instant between tapping your guy and him actually jumping or when you need to fill in land or destroy enemies. The quicker your reflexes are, the further you’ll progress. I seriously suggest getting used to using two fingers (one on each hand).

Graphics: The graphics fit the game perfectly. Nothing too fancy to make sure there is no rendering lag which means this game should play fine on all Android devices and believe me when I say, at times, I wish there was some lag because the game is intense and fast paced. Actually no not really but it is a fast and intense game.

Overall: Continuing in the series of DynamoKid (Touch is actually #4 in the series), this is a great scrolling platform game where even though you want to pull your hair out, at the same time, you just can’t stop playing. It’s addicting, very addicting and fun. Every time you die you know you can get further and further even though the stage changes each time. With the stages changing dynamically every restart, this produces a game with a huge amount of replay value as well. In the end this is a great addition to anyone’s game collection regardless if you are a casual or hardcore gamer. The only thing that would make this perfect would be the option to save, maybe not every level but a save point after a certain amount of distance covered.

We also have some tips and tricks for DynamoKid should you need any help posted in our guides section!