Radiant is the type of game that begs the question to be asked, is keeping things simple a bad idea? Sometimes it is, keeping things simple like taking a old formula and not adding a few ideas of your own, usually makes what would be a great game, terrible. Luckily for Radiant, that isn’t the case and in fact works in it’s favor.

Gameplay: The gameplay is simple, it’s Space Invaders but on crack. This game could almost pass as the spiritual successor of the Space Invaders franchise; the enemies fill the screen from the left side, right side and top of the screen. Your job as simple as it is, is to shoot them down. But it’s luckily not that simple. The game starts you out with three lives, and no credits, as you shoot down enemies they drop credits with which you can grab and use to upgrade your weapons, purchase new weapons, and add lives to your ship. There is a story line injected into the game but it’s so simplistic and boring that you won’t even notice it or you will be hitting the skip button repeatedly. Your ship starts off shooting only single small shots of energy but by the end of the game (or your lives) you’re shooting off several very cool types of shots. Everything from a spread shot, to a sweet missile that seeks out your enemies. But that doesn’t mean that the game devolves from fun and slightly challenging to not fun and incredibly easy, each new level that you enter becomes increasingly challenging that requires you to test your skills and your new weapons out. 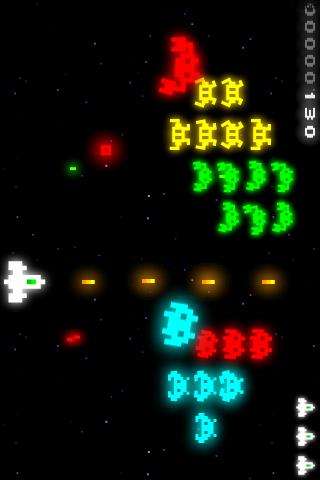 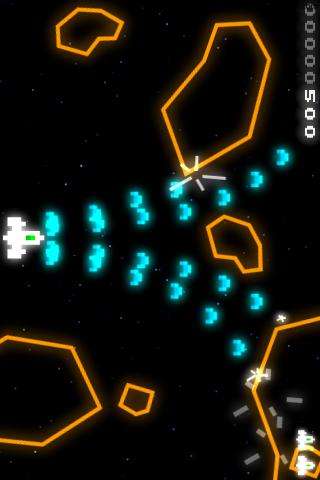 Controls: The controls are as simple as they could possibly be without hindering the arcade feel of the shooter. To move left or right, you touch that side of the screen, to change weapons in the middle of the game tap on your ship and select one of the options that it gives you. There is a auto-fire feature that lets you do the controlling without having to hassle with a fire button which would potentially block part of the action. The controls are simple and yet responsive, so as not to get in the way of the action.

Graphics: It’s a great mix of new and old, featuring slick and smooth looking enemies, bosses and asteroids. The alien ships are reminiscent of Space Invaders, but are brighter livelier than the latter. The game is in simple 2D form with bright and imaginative enemies and bosses.

Overall: It’s a brilliant game that truly keeps the old feel of Space invaders but brings to the table upgrades that allow you to get all kinds of great weapons, a simple story line to keep those that care entertained, and of course fast and frenetic action. The inclusion of boss battles is a definite plus as some of them are extremely difficult to master their respective patterns. But overall this is a great addition to your phone of choice and I think you should definitely give it a try.