Time Chaos is the next great game from Orange Pixel, and I must admit, the more and more I play thier games, the more I love this developer. The game brings me straight back to the late eighty’s and doesn’t let me go.

The greatest thing about the game is not the gameplay, nor is it the oldschool graphics, nor the sound. The greatest thing about it is the feeling that it evokes as I play the game. It reminds me of a time when I first got my hands on the original Gameboy and rocking out to the music in Tetris. The hours and hours I’d spend on the game till I reached a particular level, or score. It evoked in me the feeling of child-like wonderment, like the first time I booted up Zelda on the handheld. This game reminds me of all the times and countless hours I spent gaming as a child. This game is a wonder and true beauty to behold, I cannot find anything negative to say.

Gameplay: The core of the gameplay is moving your character to the left of the right of the screen. It’s simplistic in nature as there are no buttons to push or nothing on the screen to touch unless you want to jump. But your character jumps and shoots automatically which leaves you with your task, dodging oncoming fire. The game is pure old school fun with a new age update of having the accelerometer as your means to moving.

Graphics: The graphics are beautiful, not because of what is on screen is  beautiful or 3D or anything like that, instead it’s beauty is in the old school nature of the game. It looks exactly like it would if you were imagining yourself playing it on your Gameboy. 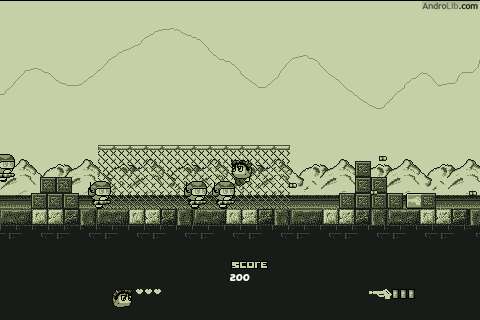 Controls: The controls are easy enough because all you have to do as the player is touch the screen to jump, which is very responsive, and tilt to move in the corresponding direction.