While the above description may seem a bit morbid, Radio Ball 3D is a tunnel racing game with an edge. Controlling your Uranium ball that is driven by radioactive waste is done using tilt controls via the Accelerometer. Survive as long as you can dodging obstacles, grabbing power-ups and occasionally running over the odd person in a radioactive suit is your main goal.

The graphics are some great smooth rendering 3D graphics that remind me of games such as Duke Nukem where everything had a radioactive symbol on it. Power-ups such as the ability to regain a life, destroying obstacles (whether you fire your weapon or if it is the red radioactive waste container it does it automatically) and you can use ramps to jump into the air to grab some of those power-ups or you can roll up and over along the wall. It is a tunnel after all and you are a ball, it is possible! 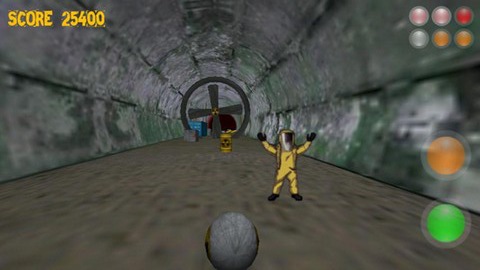 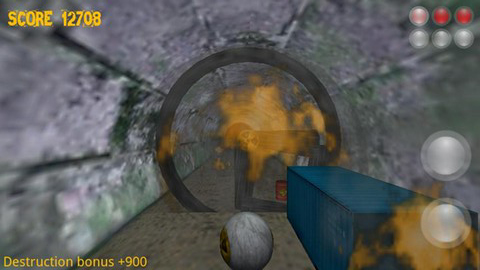 The graphics really do render smoothly while you play the game and you definitely get the impression of speed while you are playing. You get all kinds of point bonuses when you destroy items in the area or run over those poor people in the radioactive suits. There are plenty of Duke Nukem/Doom style sounds and some good music to accompany you while you roll along and destroy things.

While the tunnel racing game has been done before rather successfully with the likes of SpeedX 3D or Vacuum, Radio Ball 3D offers up a completely different setup and style of tunnel racing both in terms of looks and actual gameplay. If you like SpeedX 3D or Vaccum then you will enjoy Radio Ball 3D as well. You can try it for free or grab the full version off the Android market for roughly $1.50USD.