Game play: Here is a break in all the traditional FPS and simple puzzles. Gameloft’s Toms Clancy’s H.A.W.X. is a tactical strike simulator. Gameplay reminds me of old school flight games like Jane Combat Fighter’s Anthology but with lesser amount of planes, 26 total, to choose though there are plenty of verities in HAWX. You have a verity of missions, 13 total in 13 real world locations, to complete. But to get to those missions there is a long drug out “school” of sorts to get you acquainted with the plane and controls. Once you get past the “school” you will find tons of action to be had, just like the good old days of air combat PC games. Plenty of dog fights and ground bombing missions to keep you going for a bit. If you enjoyed flight sims of yester year then this is for you.

Multiplayer: I did not test this out as I only have one copy of the game and only one phone that can play the game. But there is multiplayer for upto 4 people on a local WIFI. 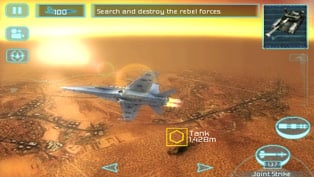 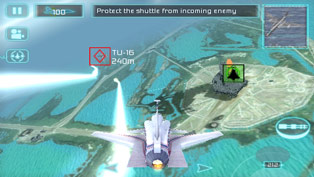 Graphics: The graphics seem to be on par with other Gameloft HD games. Everything is clear and easy to distinguish and the HUD is nicely laid out. Gun streaks and missile launches are your standard white streak and smoke trail. The only issue had while playing is that the ground and ground targets can sneak up on you faster then you can react due to the screen size and the HD resolution making them smaller and harder to see. Even with that the details are all there and I found myself getting eye candy shocked from some of the effects. All the little “cool” details are there from plane selection in the hanger allowing you to spin the plane around to different angles to very clear and detailed menus. I had no problems with slowing as this appeared only a few times on my Nexus One and the graphics are just to clear for that to be a real issue.

Sound: Music, what can I say…. If you’ve seen any Tom Clancy movie then you’ve heard the music. This is not a bad thing, but it does get a bit humdrum with the constant patriotic, action, government feel to it. Sound is on par with a game of this nature, missile effects, engine roar, and explosions all sound decent for a tiny cell phone speaker. Pop in some earphones and your in another whole world. In addition to the normal music and sound effects there is voice acting in there that doesn’t suck. The voice is loud and clear, very plentiful and matches the situations. Nothing to complain about here, but nothing that really stands out either. 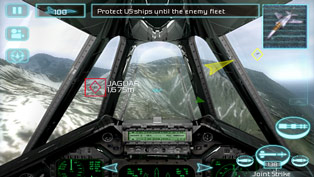 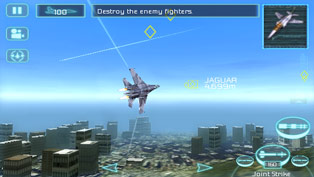 Controls: Controls, here is were the problem lies. I feel that the HUD layout and controls are well placed and take very little getting used to. One issue with the HUD is that your rudder controls are on the screen just below the plane in the center and turning in dog fights while shooting becomes so cumbersome that you can almost drop your phone. The rest of the planes movements can be controlled VIA the accelerometer or virtual stick. I recommend accelerometer as using the rudders and firing is already an issue in dog fights so adding another touch point just wont work.

The other issue I found is at defaults the plane is to slow to react and when it finally does it causes you to turn to much as you were tring to get the plane to turn in the first place. You can adjust the controls to lesson this, but I simply could not find a good balance. Also clear the area around you because you will find yourself completely twisted around while playing. That is not a bad thing you just simply get so caught up in the game that you literally loose track of what your doing in your chair. Over all the controls do work, but you’ll just have to learn to use the “kinks” the right way to play good.

You can pick this game up from Gameloft’s website only for $6.99. As of right now there is no version of this game available on the android market.