Playing against computer AI – however well designed – gets old once in a while.  There’s something very rewarding about cooperating with (or beating the hell out of) other people.  Sketch Online is a casual multiplayer experience that will either let you kill five minutes in a waiting room or run your battery right into the ground.

Gameplay: This game is reminiscent of the old board game, Pictionary. You pick your room (Misc., Difficult, Animals, etc.) and pile in with everyone else. One player at a time is issued a word by the game; their job is to draw on a whiteboard while everyone else tries to guess what the word is. Of course the rules call for no using letters except in a few circumstances.

The gameplay is pretty smooth throughout – unlike other games of this type, the rooms are open-ended so you can play for as long or short as you like without having your game cut short or walking out on other players. Points are earned for guessing other players’ drawings (more points are given for guessing before others) and also for having other players guess right when you’re drawing.

Unfortunately, there’s a pretty hefty list of cons to this game.  Most annoying is that the game rarely closes properly.  Whenever I quit on my Moto Droid, I usually need to manually force the app to stop running in the background or it keeps draining the battery.  There are also many cheaters using letters to simply write out the word they should be drawing; some way to boot them from the server would be nice.  The game could also use an expanded selection of words to guess and also of rooms and topics for players to choose from. 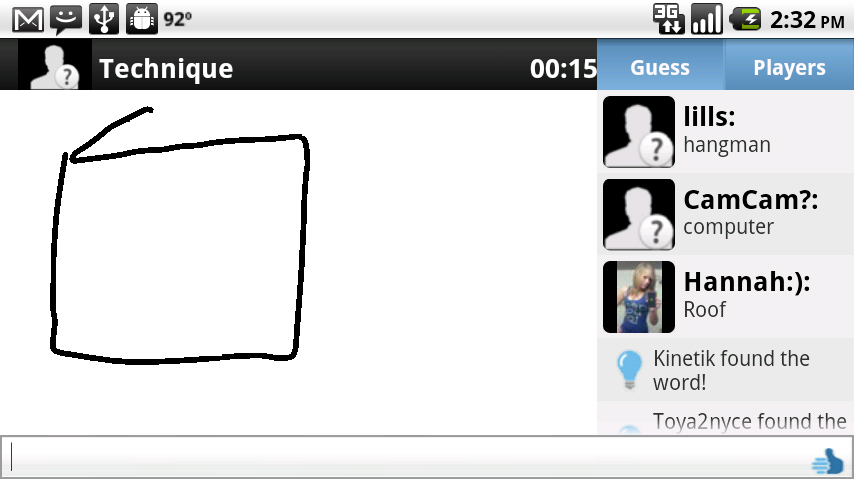 Graphics & Sound: Sound is pretty basic – you get a ticking timer when the time is running out on the current artist, but that’s about it. The graphics, of course, are all created by the players and are the heart of the game. Some artists (like me) use crude drawings and stick figures; others create surprisingly good pictures when it’s their turn!

Controls: Controls are basic. When not drawing, you just use your keyboard to guess the pictures. The artist has a choice of using lines, shapes, or free drawing, and also various colors to get the word/phrase across. Simply changing the color of the drawing can make a huge difference! 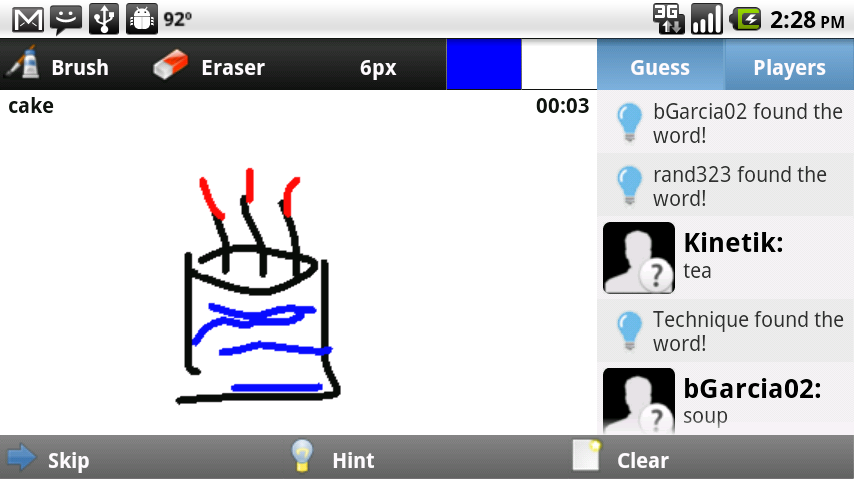 Overall: I really like Sketch Online. The game has great potential and is really a lot of fun, especially when played with a friend or two looking over your shoulder – everyone seems to want to get involved. Unfortunately, the negatives discussed above really detract from the experience. I don’t understand the allure in just writing out a word for people to “guess” rather than drawing it in a picture in a game where success is of such little consequence, but many rooms are filled with people who apparently do. When the problems with the game are cleaned up, I’d have no problem scoring it as much as a whole point higher.

The full version of the game is out now, hopefully it has addressed some of the issues that players have experienced during the Beta. You can purchase the full game without ads as well for $1.50USD.