Only a few short days ago Rovio, developers of the #1 game on the App Store called Angry Birds, finally released a beta of the Lite version of their game onto the Android market. You may also remember in our article warning you about another game ironically called Angry Birds by developer CrazyAndroidApps. It seems we were not the only ones to notice this!

Whether it was Google/Rovio or the slew of comments on the Android market for the CrazyAndroidApps game stating it was a rip off and a scam or perhaps PocketGamer also bringing notice to this conflict of names but the game in question has now had its name changed to Angry Birds Joke. PocketGamer went as far as saying this was a case of app squatting, sort of the same issue that is infesting the domain name industry.

At the release time of Angry Birds from Rovio, if you were to search for the name Angry Birds it would bring both up and the one from CrazyAndroidApps was priced at $1.99 which, judging by the amount of scam comments, unfortunately a lot of people fell for even after warnings from a few sites including ours.

This is a prime example for people to look at and learn from in regards to the Android market. When looking at a game or application you are thinking of downloading, whether free or paid, make sure to read the description! As a developer myself it can be frustrating when people do not read the descriptions which usually contains not only info about that particular app/game but usually instructions as well. Unfortunately this took a bit of a turn for the worst for whomever did not manage to refund their purchase and lost their $1.99. 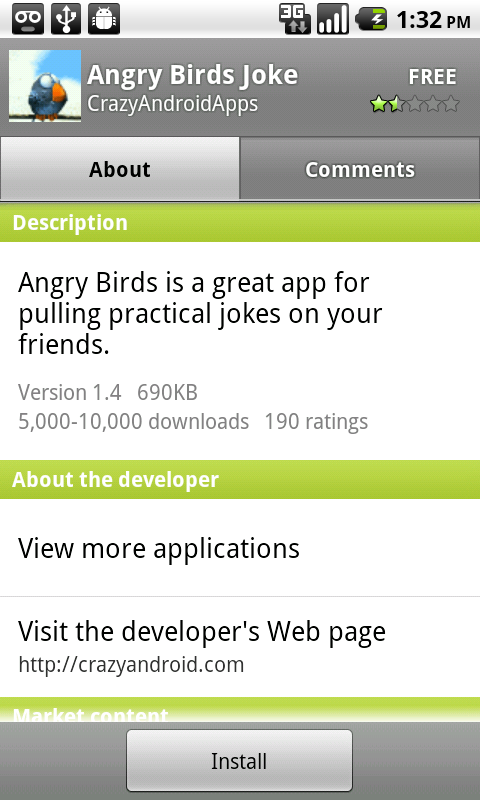 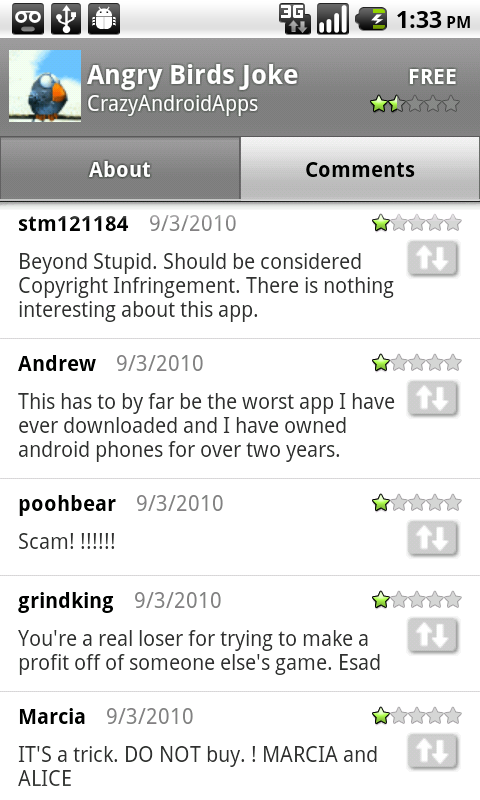 How did people manage to confuse this ‘joke app’ with the real deal? For starters if you were overly excited about the beta you wouldn’t have thought to read the description considering the icon displayed for the CrazyAndroidApps version looks surprisingly similar to one of the bird from the Rovio version. It was also released slightly before the Rovio Angry Birds hit the Android market according to Androlib.com .

Whether CrazyAndroidApps was forced to change the name by Google/Rovio or an agreement was made, it is hard to believe that it was a coincidence in names, especially with the amount of coverage the release of Angry Birds by Rovio the media has given it over the past couple of months.

What is everyone’s opinion on this? Was this deliberate in the hopes of making a quick buck off the Angry Birds name or merely a bad looking coincidence? Is this going to be a continuous problem for major developers and if so what could be done about it? Let us know in the comments below!

P.S. The problems some people are having finding the beta on the market should be cleared up soon.