There isn’t a whole lot in the way of RTS games for Android right now and even out of the ones available, even fewer are actually good. Off the top of my head I can only think of 3 good ones. Looks like I might be adding a forth one to that list thanks to GameResort’s slick looking RTS game called Castle Warriors which recently arrived onto the Android market.

Originally for the iPhone/iPad (yup another one!), it was ported over to Android almost a month ago and has seen some pretty good success. What’s even better is that it is a unique style of RTS game which sort of blends Capture the Flag and RTS gaming into one title. 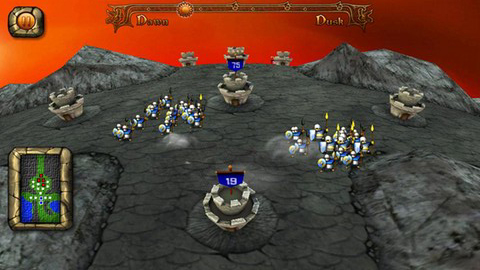 The object of the game is to control as many citadels on the map (preferably all of them) while defending the ones you control against your enemy which are slightly angry orcs. While doing that you also have to take their citadels and manage to do all this before the time runs out. The landscape is 3D and makes for some interesting gameplay as well.

Just like a tower defense game, your castles can be upgraded and enhanced with new abilities and defenses but so can the orcs! With the multiple different flavors of gaming meshed into Castle Warriors and the difficulty settings there is a fair amount of replay value, especially if you enjoy RTS or Capture the Flag games. It’s basically like Arathis Basin or Eye of the Storm battlegrounds in World of Warcraft. 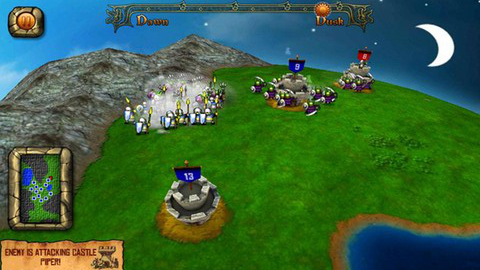 So if you are looking for a great looking RTS game that can be played casually or hardcore all the same then you might want to just go ahead and add this to your gaming collection on your Android phone, also if you are a recovering W.O.W player, this might be a good way to ween yourself off of the game or at least the battlegrounds part. you can pick it up on the Android market now for $2.99 and no, there is no free version to test out. Please note this game will run much better on newer Android phones..Droid, Nexus One or better.

Now what would be even better is if it had multiplayer and you could fight against other people.