VDCC (Verizon Developer Community Conference) was fairly interesting on a few levels. First we found more proof that indeed Unreal Engine is heading for Android. Secondly, Asokan Thiyagajan who is the Director of Platforms & Technology Strategy for Samsung inadvertently revealed more details about the upcoming Samsung Tablets. Yes that is plural.

However that was not all we got from VDCC! We also got more information about V Cast Apps Store and Tegra 2 device information and Flash goodies! So without further delay here we go on the news round-up:

Samsung’s Director of Platforms & Technology Stragety Asokan Thiyagajan was speaking during the opening session discussion and happen to mention Samsung is working on multiple tablets. While it was basically leaked out by the Irish General Manager that a Samsung 10-inch Galaxy Tablet was on its way in 2011, Askoan Thiyagajan also mentioned that multiple tablets were on their way. 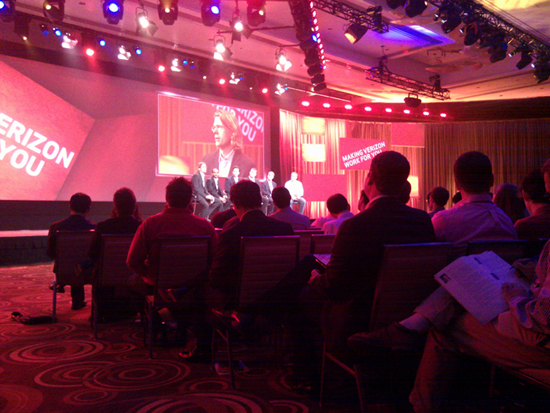 Want some more juicy info? How about that the tablets being developed, in regards to 3G/4G connectivity, will be WiFi only tablets which is great news if you enjoy WiFi over 3G/4G connections. While the 10-inch tablet is obviously on its way, it makes one wonder what else Samsung has up their sleeve as they continue to release top quality Android devices. My bet one will have a Tegra 2 chip in it.

While at the Adobe discussion regarding Flash/AIR applications for Android a slide was brought up about screen resolutions and the comparison, in a developers view, of each. In the examples one happen to be a tablet. After the presentation and Q&A I went up to the speakers privately and asked them about what tablet they were referring to. One mentioned it started with a G and ended in a Y (Galaxy obviously) but with the mentioning of the tablet in the example having an nVidia Tegra 2 chip I went and inquired to the other speaker about the tablet in the example. 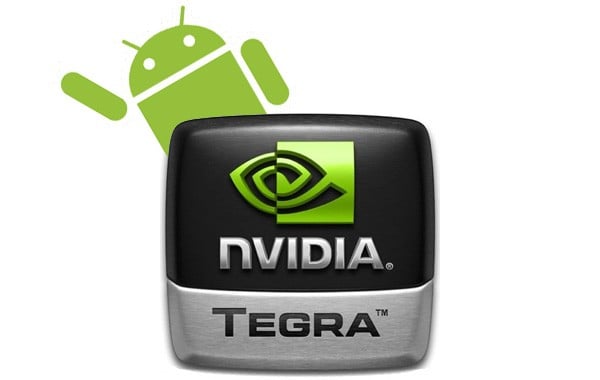 While stated it wasn’t the newly announced Galaxy Tablet it was neither denied nor confirmed it was a Samsung device (10-inch tablet?) or the HTC Tablet. It is now clear that there is a Tegra 2 Tablet in the wild and could be either the Samsung 10-inch or the rumored HTC tablet. A Tegra 2 Android tablet was also shown running Dungeon Defenders (built using the Unreal Engine) so there is definitely one out there, it’s just not obviously branded yet.

Also at the Flash session I got to see a great site by Verbatim (the company that deals with media storage like USB sticks, black CDs/DVDs etc etc) where you can create your own media monster and battle others. It’s full flash and works great on any Android device that has Flash. Head over and give it a try! There are rankings, levels, experience, special attacks and more! It’s great fun in your PC browser too.

While on the subject of Flash I got to speak with CEO of Kongregate Jim Greer and Jim Meenan, VP of Product. Kongregate recently made news with the company being purchased by GameStop. Without giving too much away I will say this, Kongregate is completely dedicated and committed to Android gaming, specifically with Flash. 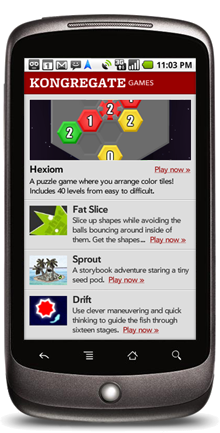 They have a lot of plans too, some of which I’ll keep quiet about and even though they didn’t tell me outright what they were, however, they were nice enough to give me some hints. Good hints too! All I can say is that it is very exciting what they have in store for Android. One thing that was mentioned openly is about their mobile interface and improvements that are on their way such as Profiles, Kreds and much more will all be accessible when you go to Kongregate on your Android browser. Currently there are over 150+ games supporting Flash mobile gaming on Android devices over at Kongregate.

With the recent announcement by Verizon regarding their app store V Cast Apps supporting Android applications and games, a lot of focus at VDCC was in regards to this. In a list of items regarding the V Cast Apps store was the approximate submission review time they are hoping to accomplish. When you submit an application or game to V Cast Apps, Verizon is hoping to achieve a turn-around time of 1-2 days. So much faster then say the Apple App Store.

Also it was heavily talked about as to why Verizon has went ahead with Android support in V Cast Apps. Main reasons listed were Quality, Choice, Discoverability, and Competition. High quality apps easily accessible by anyone on the Verizon network. Better discoverability for developers with yet another avenue for a developer to submit their application or game to increase sales and success rate. Freedom of choice for users as to whether they want to use the Android market, V Cast Apps or a 3rd party market site.

While the actual reasons are debatable as to why they went ahead with Android support, although it helps they have some of the most popular Android phones and Android’s growth is massive still, one thing they tried to really push was that developers will only see benefit to having their application or game on the V Cast App store and that it is all about the developers.

If you are interested in developing your application or game for V Cast Apps then you’ll be able to go to the Verizon Developer Community and access everything you need for free including guidelines for submission.