Bi-planes, jets, UFOs, guns, explosions and Beethoven… or is it Mozart? I’m not too sure. MiniSquadron combines them all into one beautifully crafted game. Now, I bet you’re wondering how Mozart and Beethoven can possibly go together with explosions and planes. Well, my friends, I’ll tell you how!

Imagine you’re a fighter pilot, and you’re being gunned down by other pilots. Now you’ve been hit, and your engines are stalling. You start panicking and freaking out. Before you know it, you’re little more than a pile of crushed metal on the floor. Now, imagine the same scenario with calm relaxing classical music in the background… you’re relaxed and can fly evasively without breaking a sweat. Soon you’re gunning down the opposition like a trigger happy maniac in a fighter jet.

This aerial combat game will have you sitting on the edge of your seat for hours as up to 12 waves of planes try to remove you from the skies by shooting you down, and the only thing that will stop them is sheer determination and Beethoven.

Graphics and audio: Graphically, this game is very satisfying. It is very well thought out, right down to the little details. The colors are vibrant and will cheer you up on a bad day, and if they don’t, then I’m sure the satisfaction of slaughtering a wave of 6 UFOs will.

The audio for the game is a little odd, but ultimately very fitting. The sound effects of the planes are about as accurate as you can get without having a plane in the recording studio. The backing music is the odd part. Classical music from composers such as Mozart and Beethoven will fill your ears with a calm relaxing melody while you blast the opposition into dust. There is nothing that will beat the sound of violins, pianos and crashing planes. 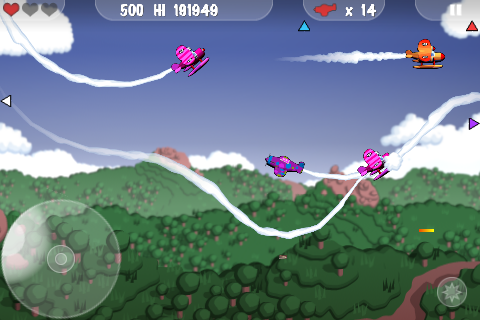 Controls and Interface: The control interface is also quite a marvel in itself. The main menu is nicely laid out with big buttons, so even those of us with Fat Thumb Syndrome can easily select the option they want without having to go back a menu. The in-game controls are the fun part.

MiniSquadron uses multi touch controls for both steering and shooting. There’s a virtual joystick in the lower left of the screen, and a fire button on the right. What’s that you said? You own an X10 or other device that doesn’t support multi-touch? Don’t worry, Gray Fin Studios thought of you too! in the options you can set a hardware button as your fire key so you can still enjoy all the fun without feeling left out. 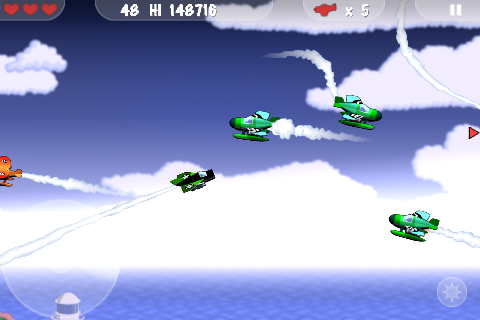 Gameplay: MiniSquadron has various different modes of play including multiplayer over a Wi-Fi network.They are all very similar, shoot or be shot, but it’s always better to destroy a real world opponent than it is to just take down the AI all the time.

As you progress through the various stages you can unlock up to 50 new planes and other modes of flying transport, which was more than enough to keep me busy.

The game also features OpenFeint, which, as you must be well aware of by now, is a community center for gamers worldwide. Getting a high score on a certain level will add it to your feint account and you could possibly unlock an achievement.

Overall, MiniSquadron is a very entertaining game that’s filled with a lot of action packed hours of play. You won’t get bored of this one in a hurry. You can pick it up right now for a sale price of $1.99 but you better be quick as the sale ends soon and the price is back to its $2.99 regular price!