Orange Pixel, creators of the awesome 4 color retro-style Time Chaos as well as a bunch of other titles return to wow their audience with miniature military mayhem in a classic Snake style game called Mini Army. Do you have what it takes to lead your men into battle? Kill enemies, grow your troops and see how big you can get without losing!

The Nokia 3310, home of Xpress-on covers and the mobile gaming phenomenon: Snake. Yes, back in the day, Snake was every bit as awesome as pac-man was when it was released. Orange Pixel have recreated Snake in a whole new type of game. The idea is still very much the same. Lead your army into battle to defeat the enemies and recruit more soldiers in the process.

Graphically, Mini Army is quite cute so will appeal to younger gamers, while the tactical gameplay would get older gamers involved. it features little bobble-head style characters that in a way resemble the entire cast of South Park carrying guns. The levels are very bright and you can easily distinguish bombs from fences making life just that little bit easier. There’s also a plan that flies by every now and then to drop something in your path, which looks very similar to the starting plane from Mini Squadron. 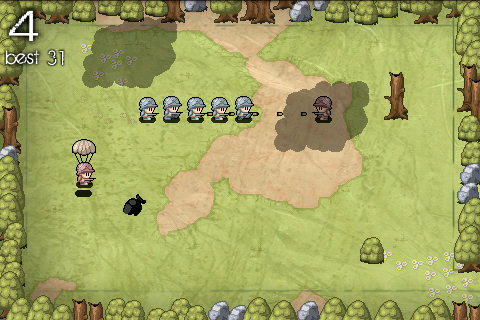 The audio is quite simple, there’s a little jingle in the background that plays for a short period which can sometimes get slightly annoying. The other slightly annoying audio aspect are the voices. Every time you press a button, kill the enemy, gain a new recruit or blink, you’re rewarded with a high pitched voice with military catchphrases such as “on our way”, “affirmative” and a few more. While initially fun, this quickly gets annoying and demands use of the mute button

The main menu is very simple, everything does what it says on the tin. Play will obviously start the game from the beginning. Briefing gives you a quick lesson on how to play, HQ allows you to access other features such as changing the location and army colors, while Feint gives you access to your feint account. Recently added to the main screen is the ability to change the control method. You can also mute the sound from the main screen. 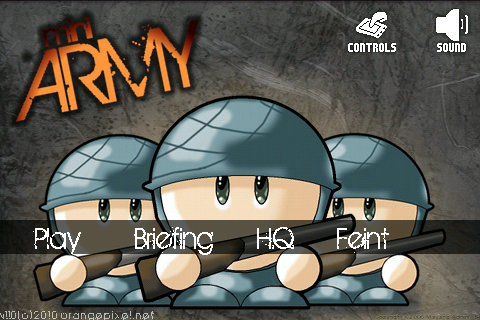 On the subject of controls, the review version I was working with didn’t have the option to change the control method, and it was very difficult to get used to. Being the nice person I am, I purchased the newer version so I could review it better without leading my readers astray with comments on bad controls which have since been corrected. There are various control methods available for almost every type of person. There is a simple but confusing “turn left or right” method, which the game originally featured and proved to be quite clumsy.

The newer release added on screen directional control for both left and right handed people, hardware keyboard support, trackball support, and you can even use the sides of the screen as your directions. Choose wisely. Even with all the control options, I was still struggling to find a layout that wasn’t too sensitive or clumsy. I’ve seen the following screenshot far too many times due to either unresponsive, or over-sensitive controls. 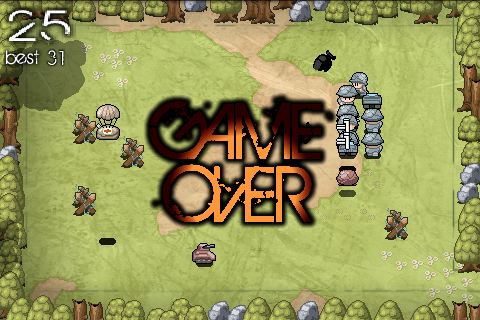 It takes a short while to get used to the control methods available, and to find the one that suits you best, but once you get into it, Mini Army is quite enjoyable. It really brings back memories of playing Snake on my old Nokia, while adding a fun, military twist. The addition of Open Feint adds this game to the list of games you must try at least once. At time of writing the current market price is $1.36 which is due to change on October 14th, so get it QUICK!!

After a recent update, i have found that Mini Army is actually getting to be more enjoyable. The new Tactice mode makes things interesting as a previously wasted animation has been put to good use. In tactics mode you have to plan carefully and shoot the opposition in order to kill them, rather than simply walking into them. You have a life bar which obviously depletes as you get shot… thats generally what life bars do. Tactics mode ends when you either hit a wall, or your army dies, whichever happens first.
The new halloween update also adds a little more fun in the spirit of everything spooky. Pumpkin tanks anybody?