Uniwar is TBS Games’ most recent, and most recently updated turn-based tactics game available now on the Android Market. Featuring rich multiplayer, a familiar Advance Wars style of strategy and a Starcraft theme TBS Games has developed something really compelling here and it’s definitely landed itself on our to-follow list.

Gameplay: The game’s underlying design is very much an Advance Wars clone by a Starcraft fan – we found the mash-up refreshing if not somewhat out of place. The 3 races in the game (Sapiens, Titans, Khraleans) emulate the 3 races in Starcraft (Terran, Protoss, Zerg) form and all the units are pretty well done. In standard Advance Wars style you produce units, gather resources by capturing city buildings with your units and eventually by taking down your alien (or human) adversaries.

Levels design offers the player strategic advantages (or disadvantages) based on terrain type you position yourself on. Positioning attackers in forested land provides shelter but limits their range of movement pretty significantly. For every benefit of using difficult terrain there is always a trade-off that balances this aspect of Uniwar quite well. Special abilities of specific troops or enemies (of which they have many) can also be used by (or against) the player to your advantage. For example some Krelean infantry units can burrow themselves in the ground for the added protection but can’t move as a result.

Game modes are aplenty here and the selection is truly massive considering the price. While campaign mode is almost completely forgettable both in story and mission objectives, multiplayer is really where Uniwar shines. Just as many iPhone games before it, Uniwar supports full asynchronous internet multiplayer in addition to it’s local (pass-the-phone) multiplayer options. If you’re familiar with the iPhone’s way of doing this, it won’t be too foreign to you. You register an account through the game with your email account then start (or join) a multiplayer game. With the option for 30 many active games at once you’ll spend little time waiting for other players to respond. You can jump directly into a game from your friends lists, invite friends to play with you and in-depth player statistics from the lobby menu when logged in. 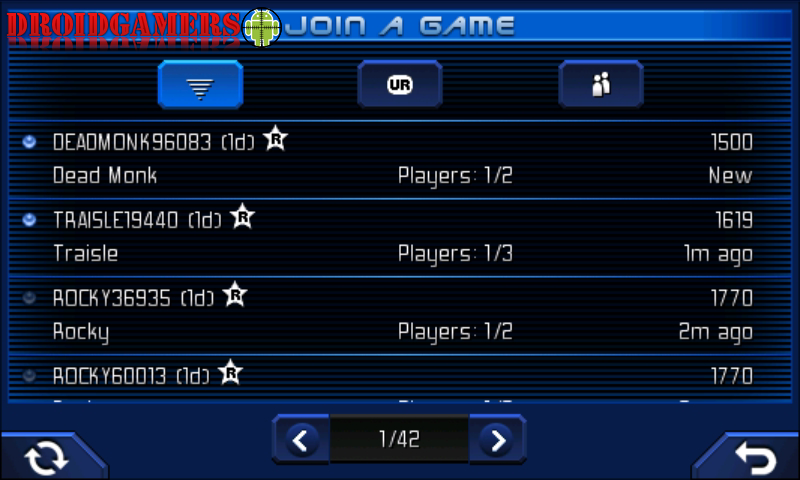 Our biggest problem with Uniwar is the frustrating and often confusing balance in the various unit and how they work with some abilities being too strong and some ineffective. It can ruin the game for you if patience isn’t your strong point. It just doesn’t get it right – some troops have near invincible armor while others are killed after very little damage from what we think to be weak units. We’re happy to see that the developer is aware of the problem however and when it’s fixed we’ll update our review to reflect it.

Controls and Interface: Uniwar’s controls are by no means original and we have to say – it isn’t a bad thing at all. Think Advance Wars menus in combat but without the face buttons on your old GBA. It isn’t too difficult to control or understand and it’s really something we would like to see on a tablet like the Galaxy Tab and it’s larger 7 inch screen. Tapping on a structure on the battlefield allows the options to queue units for construction or capture it for resources much like Advance Wars. Selecting a unit that you’ve just built presents you with the ability to order it to move to one of the spaces or attack if within firing range on Uniwar’s hex-shaped grid.

Graphics and Audio: Levels are well designed and add nicely to strategy of battles and unit design quality matches. Unfortunately the two often just don’t go too well together and on many of the levels it has the visual style of Advance Wars but with seemingly out of place aliens opponents. We can only hope the developer tones down the bloom effect on the levels, we find it near blinding in a dark room. No issues of lag could be found running the game on an HD2.

Wrap-Up: Uniwar is highly recommended as a strategy game especially after the recent wave updates to what we think was once a truly bad game. It isn’t too difficult to pick up and hold your own but don’t expect to master this one anytime soon. It’s full of interesting strategies and with the game’s addictive online multiplayer it’ll keep us coming back for more for years to come.