Lettered! – Bum a cigarette and spell me your woes.

Tilt and slide to create word combos in this noir-styled word-finder from Resounding Games. While not entirely polished and shiny, Lettered! is sure to keep you wordies occupied for hours on-end.

The basic premise to Lettered! is familiar – link letters together to create words, and each word is only as valuable as the sum of its parts; the longer the word, using the most awkward letters, will garner the most points. Toss-in a slick, noir-styling and the ability to slide letters around using the accelerometer… well, it’s not exactly your father’s crossword puzzle.

The first game-type in Lettered! is called Trickle. Depending on the board-size you choose (3×4 to 6×7), you’ll be tossed a smattering of letters to start-out with. As you wait, staring at your “D” and “H” wondering just what vowel you could possibly use to create a three-letter word (the minimum), a new letter will soon descend from the heavens and land upon thine board. If you get a letter that allows you to  create a word, great! Tap-and-swipe the entire word, from first letter to last, to clear it from the board. The catch: each sequential letter must be adjacent to the previous. Meaning, all the letters in the word must touch! And, in-order. You’re allowed to go up, down, and diagonal with your swiping, as long as the next letter in the word connects to the previous.

What happens if you have the most amazingly-awesome word EVARR, but the last couple letters are on the other side of the board? Tilt! This is where Lettered’s accelerometer feature becomes handy. You can tilt your phone this-way and that to slide letters around, with the hope of joining them to your others (oh, happy-reunions). If you find that the tilt-shuffle isn’t enough, you can also tap and “lock” letters in-place so they won’t slide with the rest. When it comes to locking, however, you are limited to a maximum number of locks before you must unlock a letter.

Why do I feel like I’m writing a Dr. Seuss story?

This is the essence of Trickle – make the most (valuable) words possible while using the slide/lock functionality to help you rearrange things, hopefully for the better. And that’s my beef with the tilt-aspect of this game – it sounds cool, but under the pressure of a clock and ever-increasing speed, I just don’t have time to think about locking, unlocking, tilting, shuffling, and planning my words! Fortunately, there’s another option…

Timechase! Boy, the devs of this game are really exclamation-happy. This second game-variant suits my slowpoke word-combining skills vastly better than the prior, allowing you to set the Time option to Infinite. Perfect. The default game of Timechase starts you out with a loaded board; no “falling tiles of impending disaster” in this version. Like Trickle, you’ll swipe words on the screen as you discover them, but unlike Trickle, everything stays-put. You continue searching for words until a) you get sick of it, or b) you set the timer and it runs-out.

Personally, I like this variant much better than Trickle, but then again, I’ve never been good under pressure. If you really want the added stress, enable the timer and choose the “open board” option – allowing you some room to slide things around while you sweat.

At the end of each game, you’re shown your most fancy-pants words as well as your final score, which you can then use as ammunition to belittle your less-intelligent and word-savvy friends.

Controls: Linking letters to create words in Lettered! is akin to the newfangled “swipe” keyboard for Android; you tap-hold the first letter, then drag to each sequential letter in the chain. Once you reach the final letter in the word, let-go and it will score the word as a whole. The accelerometer feature works well and is responsive, however it won’t let you slide a tile part-way across the screen; it’s all or nothing. What’s more, if you lock a letter, slide, and unlock… the letter will slide anyway! I expected the letter to stay-put after I unlocked it. Strange.

Graphics: I really like the gritty, film-noir style, black-and-white, inkblot graphical style used in this word game. The tiles look like ransom letters, and some of the splotches on the screen float nicely above the main interface, providing a sleek little two-level effect.

Sound: And here’s where this game loses a potential 4-star rating… There’s no sound whatsoever. Call me new-fashioned, but in this day and age, a game with no sound-effects, let alone background music, just seems unfinished. I would have liked to hear the tiles slide around and “click” into place, and long for some swanky jazz-like synths to keep me company while I brain-it-out. Tough luck.

Options: In either game-mode, your granted powers over options such as difficulty, time, board size, and minimum word-length. In addition for you AMOLED screen owners, Resounding provides a fancy “Night Mode” setting that won’t alert bears to your presence should you find yourself obsessing over letter-combinations while camping. I don’t have such a screen, so I cannot attest to its abilities.

Verdict: Lettered!, if anything, has suddenly turned me into a rather verbose reviewer – almost embarrassingly so – but, I digress. This is a fun little word game, and will definitely appeal to wordies of every shape, size, and style. I’m especially a fan of the Timechase variant, minus the time and the chasing. It’s unfortunate, however, that the game needs a wee bit of polish to bump it to a full 4-star rating. Toss some sounds in there, and I’ll re-consider. The nearly $3.00 price-point is a bit steep for such a simple game (especially with no sound), but if you derive your gaming pleasure solely from the quality of letters you can assemble… just pretend that fourth star is actually there. 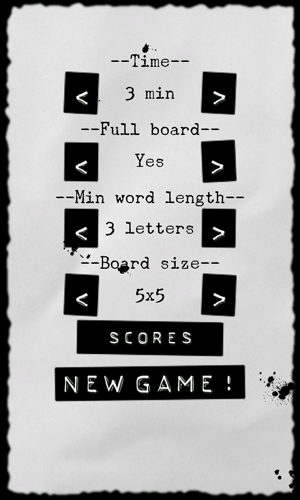 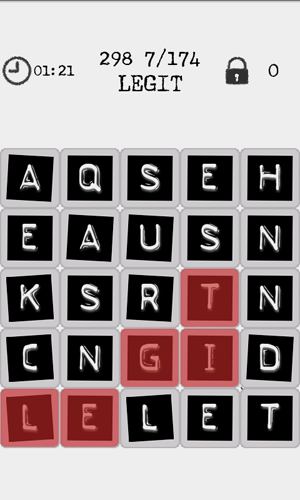 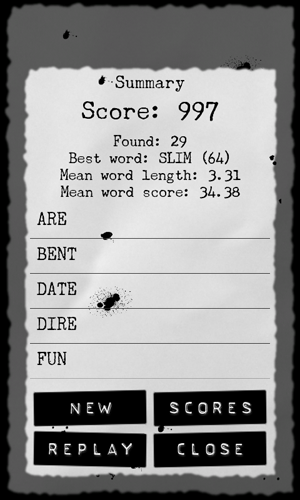 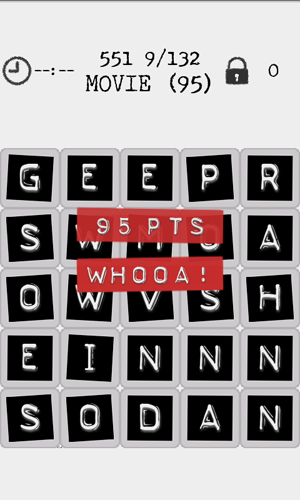