Farm Tower Review – Get all the animals safely to the ground

In the style of games like Gravity Lander, Farm Tower brings physics gameplay to your Android phone but with farm animals instead of 2D retro spaceships. The object of the game is to get the farm animal(s) safely to the ground, almost. You have to keep them on one block above ground for a few seconds before you can move on to the next level.

There are various types of blocks as well including bounce blocks (green colored), slide blocks (blue), and indestructible blocks (black). Your mission is to get the farm animals onto one remaining block, above ground, without letting the animals touch the ground.

Controls: Controls are all touch screen based. To remove blocks you just tap on them! You can tap on any block to remove them except for the black colored ones which are indestructible. There is also a button you can access by pressing the settings button on your phone to bring up the menu and from there, should you need to use it to save time, you can clear all remaining blocks from the level. 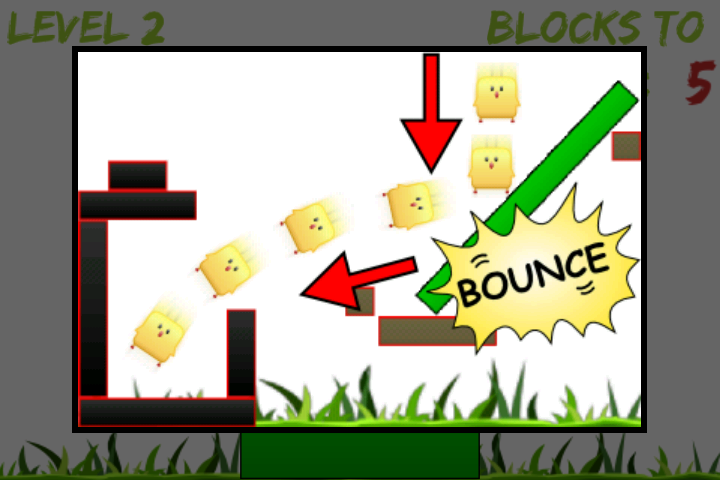 Sound and Graphics: Farm Tower features some good farm-style music in the opening of the game. Aside from that, there is no background music or sounds until you complete a level or fail a level. A little background music while playing each level would have been a nice little bonus.

Graphically, Farm Tower offers up some cute looking animals that remind me of a series of books from when I was a kid where everyone had square or circle bodies. The name escapes me for now. While this may be a bit too cutesy for some people, physics games are usually geared towards staggering eye candy graphics and focus more on the puzzles within the game.

With that said, the animals look good but the blocks in game are flat 2D graphics. A little bit of sprucing up with even a little shading to give it a bit more depth would make it bit better look and match more the style of the animals which have a bit of a 3D look to them (via shading).

Gameplay: As mentioned in the beginning of this review, the object of the game is to get your farm animal(s) safely to the last remaining block without touching the ground. Each stages gets more difficult as you progress where you’ll have to figure out how to properly bounce, slide and drop the animals by tapping away blocks. You also have to remove a minimum amount of blocks regardless if you complete the level removing less.

Sometimes it is just a matter of luck, especially dealing with multiple animals, that they fall/move just the right way and other times it is pure skill. It can be frustrating at times but in the end worth it when you finally complete the stage you’re stuck on. OpenFeint integration gives it a bit more replay value as people who enjoy unlocking achievements and awards will have more to do in the game, even after completing the 50 levels.

Overall: Farm Towers is a unique game taking the Gravity Lander style of gameplay and making more of a puzzle out of each stage then just simply dropping the ship onto Mars safely as in Gravity Lander. It is definitely a good time killer and with a few minor touch-ups here and there it could be quite the polished and popular game.