Great news for all you RPG fans out there, especially the ones who played and loved Zenonia by Gamevil. Just spotted on Twitter, thanks to the hounding of staff member Chris Summerfield, was a tweet by Gamevil mentioning when Zenonia 2 would officially be available for Android. Well the wait is almost over according to Gamevil! 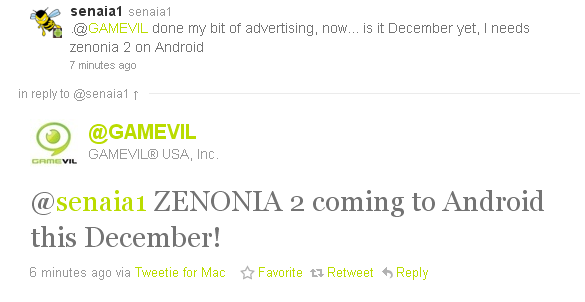 According to Gamevil, Zenonia 2 will officially be available for Android sometime this December! Hopefully it will be earlier then later in the month although either way we aren’t complaining. The biggest new feature to come in Zenonia 2 is the ability for PvP against other players which brings this game to a whole new level regarding builds, gear and replay value.

As more information comes to light we will be posting here for you to enjoy! Also enjoy the video below showing off Zenonia 2!