We have some pretty sweet tablets available to us now like the Galaxy Tablet and in the near future such as the Notion Ink and it seems that Acer is getting into the game too. They are releasing anything half-assed either with their upcoming 10.-inch and 7-inch tablets that they just announced today at the Acer press conference.

Both tablets are currently unnamed at this time but both are packing some serious hardware that will make for some great gaming if you prefer to do that on a tablet instead of your phone. 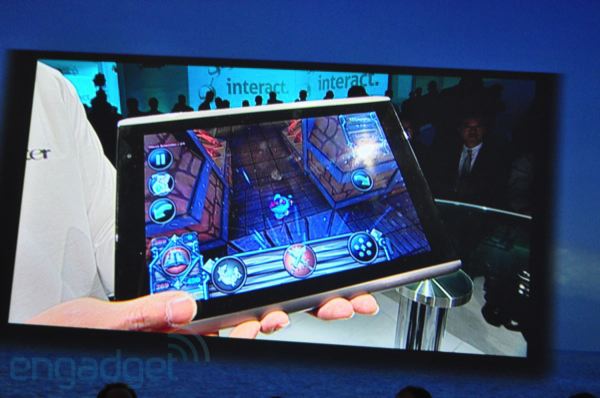 So while both tablets are sporting almost identical hardware, a few minor differences aside, both will be some serious competition for current and upcoming tablets. With Flash being supported we can also surmise that the Android version will be either 2.1 or 2.2 at time of shipping (or hopefully 2.3). No word on cost just yet but we can expect to see these bad boys available sometime in April 2011.

Two points for anyone who can guess what game that is they are using to show off gaming on the Acer tablet.

Update 10:55am Nov. 23, 2010: It seems a lot of other sites are reporting that these two tablets will be coming with Honeycomb at the time of release.