Gameloft is heading full steam ahead with their Advent Calender giveaway and today’s gift is a great one for all the Android gamers out there. Head over to Gameloft’s twitter or check out the link at the end of this article to get your free copy of Dungeon Hunter HD! This is a great top-down Diablo-ish type of game that sports some great graphics. 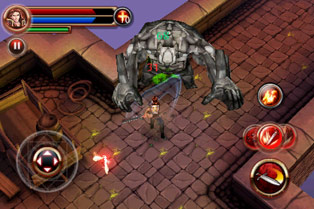 This isn’t a small game though and when you are ready to get it, you’ll need roughly 180MB of space so be sure to free some up! As for Gameloft, we can expect more coming from them over the next two weeks including more free and discounted games for Android during their Advent Calender Giveaway.

Enough with the talking, go get yourself Dungeon Hunter HD here: Advent Calender Day 3 prize. Hurry though, it won’t last long! Be sure to follow Gameloft’s Twitter from more prizes. For more information on Dungeon Hunter HD, check out our review!

Update Dec. 3rd, 2010 10:56am: Gameloft was having some technical difficulties but apparently have cleared them up. They will be keeping Dungeon Hunter HD free for an extra 24hrs. As someone mentioned on Twitter, another reason to put these games on the Android Market.