As far as we can tell this could be the first time a small game developer has been acquired by a bigger one in the world of Android. Gamevil just announced that they have acquired RYUminus, developers of the music simulation game TouchMix. Gamevil has also stated that an update is on the way with new songs.

“We’re excited to bring aboard TouchMix, which has been squarely at number one in the rhythm game genre on the carrier Android stores in Korea.” said Yong Kuk Lee, CFO of GAMEVIL. “Going forward, GAMEVIL hopes to make its mark not only as first party publishing but also as publishers of excellent external games.” 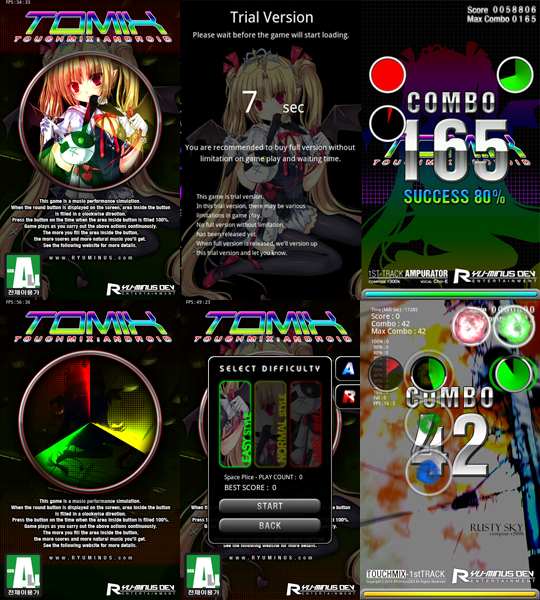 TouchMix is a music simulation game, sort of like a DDR type of game but revolving around music, similar to Beatmania IIDX. All the controls are touch screen and it is a rather fun game to play, one of the few music sim games for Android. Gamevil acquiring it means there will be more updates and songs for it, keeping it fresh and entertaining. Check out the full press release below.

The full version of TouchMix is available for download off the Android Market for $1.70 and there is also a free trial version for you to test out.

LOS ANGELES, CA – December 22nd, 2010 – GAMEVIL(R), a leading mobile games publisher and developer announced its first ever acquisition of outside development talent, RYUminus, and its rhythm action game for Android, TouchMix. TouchMix will be serviced and expanded by GAMEVIL into other global markets.

“We’re excited to bring aboard TouchMix, which has been squarely at number one in the rhythm game genre on the carrier Android stores in Korea.” said Yong Kuk Lee, CFO of GAMEVIL. “Going forward, GAMEVIL hopes to make its mark not only as first party publishing but also as publishers of excellent external games.”

With the acquisition of RYUminus and TouchMix, GAMEVIL has formally announced the expanded plans of publishing externally developed mobile game titles. Widely known for its leading RPG and Sports titles such as ZENONIA(R) and Baseball Superstars(R), GAMEVIL now enters the new genre of music and rhythm action, and intends to go beyond with more external titles to complement its internal franchises.

About GAMEVIL
GAMEVIL(R) is a premier mobile game publisher located in Seoul, Korea and Los Angeles, USA. Established in 2000, GAMEVIL has earned a reputation as one of the best companies in the mobile games sector by crafting award winners in a diverse portfolio of games. GAMEVIL is well known for revolutionizing the sector with its original and innovative mobile games, backed by unparalleled expertise in advanced mobile technology. As a world class leader in mobile games publishing, GAMEVIL continues to lead the sector with a commitment to establish mobile as the definitive mass market entertainment platform of the world. GAMEVIL is currently listed on the KOSDAQ Market (Ticker: 063080, Bloomberg: 063080:KS, Reuters: 063080.KQ)

GAMEVIL(R), ZENONIA(R) and Baseball Superstars(R) are registered trademarks or trademarks of GAMEVIL Inc. in the U.S. and/or other countries.
Follow the Twitter feeds at http://twitter.com/gamevil and Facebook Pages at http://facebook.com/gamevil.