GTA clones are nothing new to mobile platforms.  Rockstar themselves have release quite a few for the Nintendo DS and Playstation Portable over the years with varying degrees of success.  Can Gameloft cash in on the Android platform that seems to be lacking in this genre?  Hit the jump to find out in our review.

Like other games on the Android platform that Gameloft created, most are clones of already existing franchises.  One look at Gangstar and it’s easy to see what game Gameloft used as their inspiration.  The game is basically Grand Theft Auto on your phone complete with the signature art style from earlier iterations in the series and the map and weapon icons on the screen.  If that’s what you are looking for, rest assured it’s all here along with a crazy story to boot.  If it’s not, well, you won’t find anything too original here to speak of.  If you’re still interested, keep reading to find out how I scored this game against a number of categories after spending some quality time with the game on my Droid 2 device.

Gangstar begins with the introduction of your character and his overarching goal for the game.  You learn that your brother got a little too over his head in the gang world and he’s now in trouble.  As a responsible older brother, you set out to rescue him by talking to an old decrepit swamp hermit who has a smoking hot brunette for a girlfriend.  Yeah, it gets crazier as time goes on.  After making the introductions, you’re instructed to perform your first mission.  The missions you will take on consists of the normal fare of GTA style missions.  In one mission you will steal a hearse and then escape with the funeral party shooting at you in the distance.  Another will have you hopping on a jet ski while firing at boats.  The range of missions is amazing for a mobile title and there are over 70 in this game.  Throughout these missions, you’ll interact with new and interesting characters for a total game time that could possibly range into the teens of hours depending on your play style.

Throughout the missions, you’ll be asked to steal cars, shoot up enemies, and cause all sorts of general mischief.  There is a nice variety of vehicles and locales that you’ll encounter on your missions so the game doesn’t get too stale.  You may find yourself performing the same missions over and over, but it seems the devs at least tried to space them out enough so that they aren’t right after each other.  if missions aren’t your thing though, just like in GTA, you can roam around the city and do whatever you like.  Some gamers have sunk months into this type of activity in the past and the game definitely delivers. 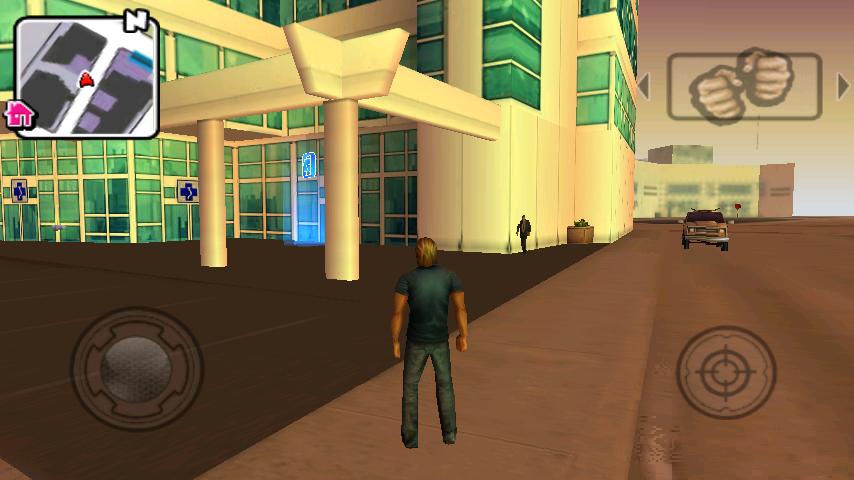 Unfortunately, the controls in Gangstar: Miami Vindication are pretty bad.  While running around and shooting can be handled well enough, hop in a car and all hell breaks loose.  You are given a couple options to handle driving, motion control where you use your phone like a steering wheel, a wheel on the screen with breaks and accelerators provided, or a slider bar as the wheel with gas and brake provided on screen.  The steering wheel and sliding bar are so awkward that you are really only left with the option to use the motion controls (the default choice) and that is by no means a pleasant experience.  On screen you are given the gas and the break and you steer by moving your device to one side or the other.  If you are sitting somewhere comfortably where you can move your body and flow with the movements, you might be OK.  But try this lying in bed on your back or in a waiting room in public and you’ll either crash into a wall in game or look like a fool (or both).

It’s really disappointing since the game was pretty strong otherwise but the controls really bring it down.  It almost feels like the game is too big for it’s platform.  Gameloft tried to do too much and give the user a lot of control when the extra controls only hurt the end experience.  I won’t say this is a deal breaker though.  If you have the patience, you can get past this with some practice.  It took me a good long while to finally get the hang of it, but when I did, I was able to navigate a little better, but not by much.  Missions where you need to drive impeccably resulted in the urge to break something.  But, the patient can most likely succeed if they try and put some time into this.

The presentation and sound in Gangstar: Miami Vindication is hit or miss.  The game looks nice but can chug at times which results in performance taking a hit.  Usually this comes at the worst times too, in the middle of a gunfight or car chase when there’s a lot going on at once.  While it didn’t happen all the time, it deserves to be mentioned for potential buyers.

One thing I found really interesting was the ability to listen to the radio.  This is something trivial in the grand scheme of things, but it adds a lot of personality to the game.  The stations are original with funny dialogue and the range of stations play a number of different types of music.  I found myself waiting to get out of a car so I could hear the end of a commercial.

Gangstar: MV seems like a game that is a little too big for it’s own good.  The sheer amount of things to do and control given to the user often comes at a cost to performance and control.  With that said, if you appreciate a good GTA clone and wouldn’t mind spending a reasonable amount of time getting used to the controls of this game, then I think you should give it a try.  The production value is high and the story is even co-written by a script writer for “The Wire” television show.  Just remember to keep your cool when you drive your car into a lake for the nineteenth time