While they did release a photo of a storefront for the Vodafone store having a smashed in window, to say the entire stock was ripped off would mean they were holding the entire amount of launch devices in one retail location. Either that or somehow the robbers had teams of people at every location that was going to launch the Xperia Play and broke into it and took the units. Do we need to be the ones that say this… REALLY? 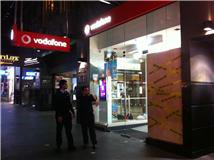 Vodefone informed everyone via Facebook that due to a major security breach, the entire shipment of Xperia Plays to be used in the launch have been stolen and therefor will be launching the delay. Of course people have already been leaving comments that this was staged to cover up the fact that units had not even arrived yet from Sony Ericsson due to a shortage of parts. So if you live in New Zealand and were hoping to get an Xperia Play at launch, you might have to wait a bit longer.

Yes we did bring this Epic Fail image back to life once more.