The news that Kairosoft, the studio behind the marvelous Game Dev Story, was going to release a follow-up couldn’t have found happier ears than mine. I had whiled away many an hour trying to create a best-selling fictional video game on my tiny phone display while real-world Triple-A titles lay untouched by my 360 just across the room.

Game Dev Story was simple and addictive – what could possibly go wrong with its spiritual sequel?

Gameplay: At first Hot Springs Story seems straightforward enough. Using much the same gameplay mechanisms as Game Dev Story, you have to turn your tiny Hot Spring into a giant leisure complex by investing in new facilities – like a new steam room or massage chair – and then upgrading those facilities with nearby ornamentation or bonus items. Customers will come, stay the night, and spend their hard-earned Yen in your complex, and you can advertise for a better – or richer! – class of customer to earn yet more money.

If you’re wondering what on earth a Hot Spring is you aren’t alone. Here lies one of the main problems with the game for me and I suspect much of the European and American audience. I was brought up on video games, so it’s simple to pick up and play a game-studio-simulator. I have no idea what a Hot Spring is, and although learning about a new or even fictional culture can be one of the great joys of art, when it comes to video games, you do need a little bit of a steer in the right direction. Unfortunately, Hot Springs Story plunges you in at the deep end without offering so much as a pair of water-wings. Little of the game makes instinctive sense, and some of it is downright baffling; for example, the mechanics of making the in-game advertising are hard to understand and never even explained. 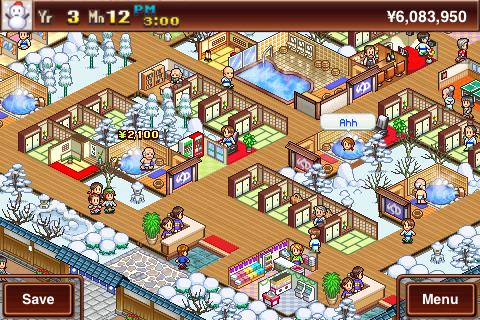 Once you do get your head around the scenario and the way the game works, some of it still doesn’t make any sense. For example, you have to invest in nearby businesses, such as video game companies, so that their employees will come to use your Hot Springs. This is utterly illogical and breaks what little illusion of reality the game manages to build up. To add insult to injury, many of the little quirks that made Game Dev Story fun, like naming your products, have gone: now your facilities are just given function and numbers, e.g. “Tatami Room #4”.

Graphics & Sound: Hot Springs’ graphics have come on a little from its predecessor, with the screen now rotating with your phone and some more intricate detail. But as with the gameplay, less is more; the cute simplicity of the previous title has vanished and the action is frequently obscured.

The sound is fine if unremarkable; I’m personally yet to come across an Android game with good music or interesting effects and this title doesn’t change that.

Controls: The menu system remains as awkward as it was in Game Dev Story. The isometric view seems to make the rooms and facilities difficult to select. Functional at best.