[Updated] Minecraft Mobile getting unveiling at E3? Very possible and yes that includes an Android version.

This invite that is going around seems to be hinting at an unveiling of Minecraft Mobile at this year’s E3. The invite comes from Sony Ericsson with a photo of the Xperia Play on it and mentions some nice relaxing evening that will happen at E3. It also has Minecraft graphics all over it.

Not too long ago Mojang mentioned that they would be making a mobile version of Minecraft for both iOS and Android. It would be due out ‘sometime later this year’. By the looks of the invite, that time may be much closer than expected. It makes sense though considering Minecraft will be officially out of beta this November for the PC as well so unveiling the mobile version, even if it is a beta, before then is highly possible. 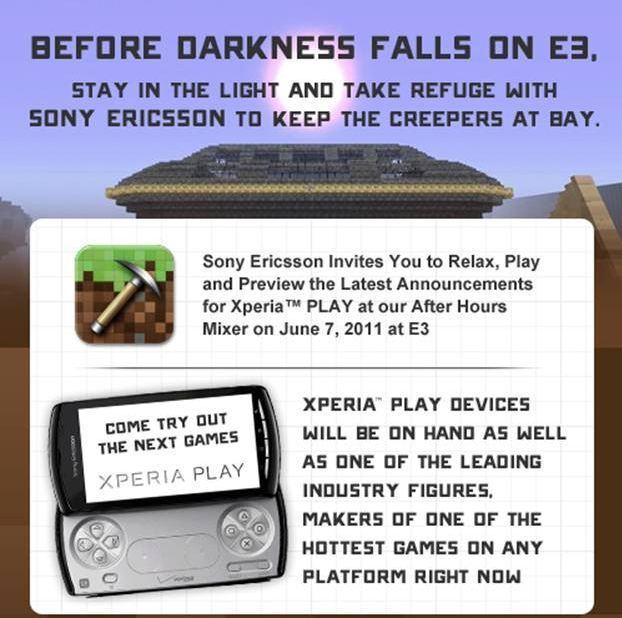 We don’t know for sure if that is what this is but considering how the invitation looks, it’s a pretty safe bet. To top it all off, Notch (Minecraft creators alias) will also be attending E3 this year. Even better, we will be at E3 as well so if this goes down, you’ll be sure to hear it here!

Update May 24th, 2011 1:57pm: It has been confirmed that Minecraft will be available on the Xperia Play first for a temporary amount of time exclusively. After that it will be made available on other phones as well. The Xperia Play version will take advantage of the custom controls.