There is nothing quite like sitting down with a relaxing cup of coffee and beginning your domination of the galaxy. Build your infrastructure, develop technologies, and unleash your fleets of DOOM upon the galaxy in this complex space-themed RTS. How quickly can you queue?

Space STG II, for the newcomer, hits you like a technicolor train wreck. With its glaring spelling and grammar errors, cheesy sound effects, bright and dissonant circa-1996 Photoshop graphics, a meandering spiderweb-like ui, and a learning curve reminiscent of Civ2, one would be tempted to simply toss it aside as a half-baked and unnecessarily complex game… But if you give the barely-informative tutorial a couple shakes, and then peep my custom STG II Player’s Guide (based on his original), you may just find a diamond in the rough.

NOTE: Space STG II is free on the Marketplace, but only includes 4 of the 40 missions and your development-point options are severely limited. To purchase the full version, visit the developer’s website and follow the instructions to get the activation code. STG II “full” is not hosted on the Android Market.

STG II plays like a disorganized version of Civilization, in space, and in roughly 1/100th of the sandbox size. Like a Civ game, you’re plopped on a planet sporting a beginner’s load of raw materials and a smattering of starter-ships. Your basic goal is to expand your colony and conquer the other planets trapped within the closet-sized map. To accomplish this objective, you’ll need to start building!

Each planet has a total structure-capacity called “area”, as well as a maximum output of energy used to power the buildings. Area is a fixed limitation, while energy can be increased by building power plants. Each building, of course, has an additional cost of raw materials – namely, metal and crystal – which are continually generated every 6 seconds in a quantity based on the number of mines you have built. Since this game is very domination-focused, plan on needing much more metal than crystal (for ships). In addition to metal and crystal, building a laboratory will generate another resource called “graphen” which is used for technology upgrades and purchases.

Just as you’re starting to construct your second mine, you’ll probably start getting attacked by enemy forces. This is a real-time strategy without a pause feature, so prepare for feverish micro-management. In fact, that’s just about all you do in STG II – feverishly micro-manage multiple planets until, POP! you’ve conquered the last remaining planet and are dumped back on the mission screen. Congratulations! But, I digress…

You’ll need to construct buildings in-parallel with your ships, which brings me to the second part of the game. Beginning with fighters, there are several types of ships which can be unlocked via “development points” between missions. Transporters shuttle resources from one planet to another, but must be “upgraded” in order to automatically return home again. Colonizers allow you to build on newly-conquered planets and can be re-used. And rocketers, warships, and bombers can be used to bombard structures on enemy planets as well as attack enemy ships. Ships also cost resources (duh), and queue in an irritating sort-of way… While most major RTS games churn-out one unit at a time regardless of how many you queue, STG II likes to make you wait until the entire queue is finished. This odd mechanic forces you to even-more frantically micro-manage your fleets, especially when you’re being attacked and every unit counts! What’s more, there’s no notion of waypoints to streamline unit-grouping. 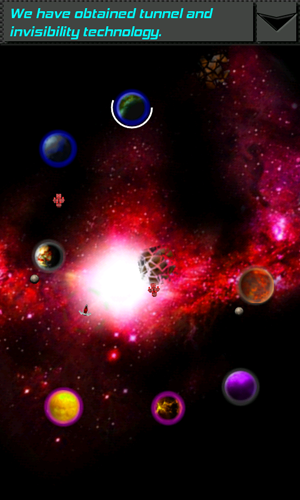 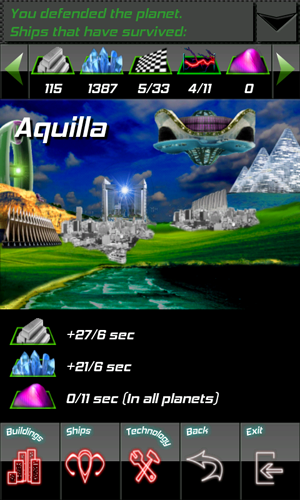 The unfortunate bi-product of the lack of automation, pausing, waypoints, proper queuing and delivery of units, and a teeny-tiny map is a game where feverish micro-management takes center-stage. You’ll rarely find yourself spending time in the actual “map view” ordering ships around as you constantly need to be queuing the next development cycle. While this demand for your undivided attention has the effect of making the time pass-by very quickly, I worry that it’s less about the enjoyment of the game and more just the lack of automation that’s the culprit. While you’re nose-deep in development, spanning across multiple planets, all of a sudden you’ll be dumped to the mission screen and congratulated on your success! All the while, you’ve been so busy with micro-management that you forgot what the actual objective was. But hey, you made it.

One last thing to mention, and this seems to trip a lot of people up, are technology upgrades. After every mission, you’re given development points based on your general success. You can spend these points to unlock new ships, ship upgrades, and technologies. Once purchased, you’ll need to build a laboratory (in the next mission) to purchase the unlocked technologies before they can be used. In some cases, you’ll need to purchase and then activate them. For example, you can unlock the “probe” technology, but then need to build a laboratory, buy a probe, then activate it to send it off. Like many aspects of this game, the acquisition and use of technology is unnecessarily complicated and could use some serious work.

The Good
Once you get over the hump of the learning-curve, STG II is quite immersive and offers much more depth than most Android RTS games I’ve seen thus far. With a deep tech-tree, multiple ships, upgrades, and plenty of things to manage, it will keep you on your toes from beginning to end. The computer AI seems relatively intelligent, in an artificial sort of way, and provides a tough challenge – even on the standard difficulty. However, in the late-game it seems to half-ass it a bit by sending scattered and weak attacks.

The Bad
This game seriously, seriously needs some play-testing and QA work. STG II is rife with spelling and grammar errors, poorly-produced sound effects, voice-overs that I can barely understand, a labyrinthine ui, and puts entirely too much emphasis on micro-management vs the actual gameplay and strategy. You’ll ultimately find yourself compulsively cycling-through planets to queue up new ships, then getting stuck trying to weave your way out of the messy ui and return to the battlefield to intercept enemy fleets. And if you make a targeting error, as those of us with FFS (fat-finger syndrome) tend to do, you’ll have to sit and watch as your planet is bombarded while your fleet wanders-off to buy a pack of Doritos at a nearby asteroid. Frustrating.

The Verdict ★★★☆☆
STG II is a good game with tons of potential. If handed-off to a team of play-testers, or perhaps a quality game development group, it could easily become a top-notch RTS on the Android platform. Unfortunately, it currently feels half-baked and loose at the seams. There’s plenty of development options, but no real “path” or a feeling of priority. If you enjoy a heavy dose of micro-management, you may glean some enjoyment out of this game, but for the most part… micro-management IS the game. Most current RTS games on the market (PC) have come up with ways of de-prioritizing and automating this aspect of the game in favor of the more strategical elements – gathering units of varying specialty and attacking key targets. STG II could learn a thing or two from the big boys.