TNA iMPACT Review: An attempt to recapture N64 wrestlers on your Android device, tights and all.

“TNA iMPACT” (By Namco) is a clear throw back to the Nintendo 64 wrestlers of the late 90’s, like “WCW vs. NWO” and “WWF No Mercy”. Many regard those titles as being some of the best wrestling games ever made. Does “TNA iMPACT” live up to its obvious influences? Not really… but it is a step in the right direction.

Controls: If you’ve ever played a wrestling game for a console, the controls for “TNA iMPACT” should make you feel right at home. You’re given an onscreen joystick, a grapple button, a punch/melee button, a run button and a “special actions” button (IE pin, climb the ropes, grab a weapon). On screen joysticks for cellphone games are often functional, but not optimal. Without physical feed back it becomes very easy for a player to inadvertently slip beyond the joystick circle, thus loosing control of their character.

“TNA iMPACT” takes care of this problem by having the joystick move around the screen with your thumb. This makes controlling your wrestler very easy, other developers should take note, I’d love to see this style joystick in other titles. The other onscreen buttons are responsive and worked well. Though I would imagine anything less then a 4” screen would lead to miss clicks. Overall the controls for “TNA iMPACT” are exactly what you would want for a wrestling game and feature the best onscreen joystick I’ve used to date. 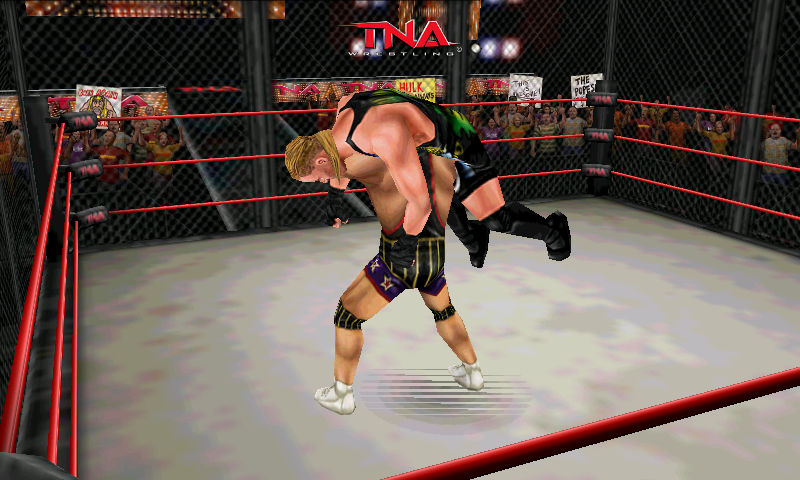 Gameplay: “TNA iMPACT” has two different gameplay modes. Exhibition, where you choose from a cast of TNA super stars (or your own custom wrestler) and square off against your choice of opponent, in your choice of match style (Standard, No DQ, Submission, tag, Falls count anywhere, Cage match, noticeably absent is ladder match) . The second option is career mode, where you take a wrestler of your choice through one of three different divisions (Heavyweight, X-Division, and Tag Team) each with a unique story line.

After winning matches your given skill points to increase your wrestlers attributes, those being speed, power,toughness and  charisma. The story lines are generic and at times silly… but its a wrestling game I don’t think anyone was expecting academy award winning story lines here. As is, the story serves as a mechanism to put you into matches in various situations, for various goals. Really that is what a wrestling games is all about… the fights… speaking of which.

The Fights. This is the bread and butter of any fighting game, unfortunately this is also where this game makes its biggest stumbles.  Your given a tried and true system of grapples, strikes and counters.  Strikes do minimal damage but have the chance to stun an opponent, opening them up for grapples, which allow for more powerful moves such as suplexs and piledrivers. The problem the game seems to be suffering from, is that all of these abilities are executed very slowly.

Even when using the supposed fast “high flyer” type fighters, the pace of the matches always seems to be crawling. This makes it difficult to really get into a match, or get a flow of big moves going. Also the varieties of moves are fairly limited, each wrestler has only 2 executable grapple moves, and 1 submission move. Speaking of submissions, they can be used to beat any match drastically quicker then traditional pinfall, and feels a bit unbalanced. In the end, the gameplay is drug down by a very sluggish combat system, that always feels like its a step behind your actions. 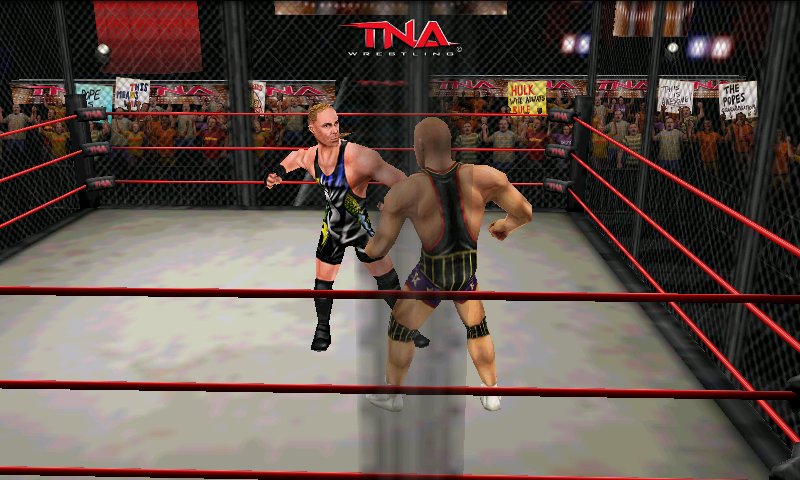 Graphics and Sounds: The sound track for “TNA iMPACT” is, as you would expect, a heavy rock track list, which works for this game. I did notice an apparent bug during wrestler entrances where the audio seemed to kick out before the intro animations. You get the typical “ohhs and ahhs” of the crowd when power moves are preformed, and while it seems to be the exact same track each times, it does not really distract from the game in any way.

Graphically the game reminds me very much of a N64 wrestling game, the characters are a bit blocky, and the animations have some clipping issues, but overall the game looks pretty good. It played very smooth on my G2x with no noticeable drops in frame rate. I would be interested to see how it runs on older devices, I suspect you could see some slowdown.

Overall: “TNA iMPACT” may not live up to games like WWF No Mercy, but it is certainly a step in the right direction. Parts of this review may come off sounding fairly negative, but I don’t want to give the impression that I did not enjoy playing it. I just see where it could be made much better, and hopefully this will lead to more/better games in this vain brought to the Android platform. I would also like to note that I have not watched wrestling in many years, so the avid wrestling enthusiast may be able to enjoy this title on a level I can not. Either way its still a fairly fun game despite its issues, and I would recommend it to any fan of the wrestling game genre.