Back in the beginning of June we mentioned that HandyGames had announced a sequel to their awesome dynamic tower defense game Guns N’ Glory. This new game, named Guns N’ Glory 2, will be heading our way later this Summer and will be keeping all the same great gameplay as found in the first.

Of course unlike the first game, Guns N’ Glory 2 will be set in the World War II time period and not the wild west as the first one was. All the units though that you can use are moveable unlike most tower defense games that once you plant a tower, it is there for good unless you sell it back. Even though this is based in the World War II era there won’t be Nazis or anything like that, historically speaking. Instead it will be just good old fashion army battles with it being Germany vs USA.

Initially Guns N’ Glory 2 will come with 12 levels and will also bring with it some new gameplay features such as being able to build more troops once the level you are on is underway. In the first game you pretty much had to contend with what you were able to hire which were goons laying around and other items like cannons. In this game you will be able to build up troops yourself which means there will be plenty more way to tackle each stage. 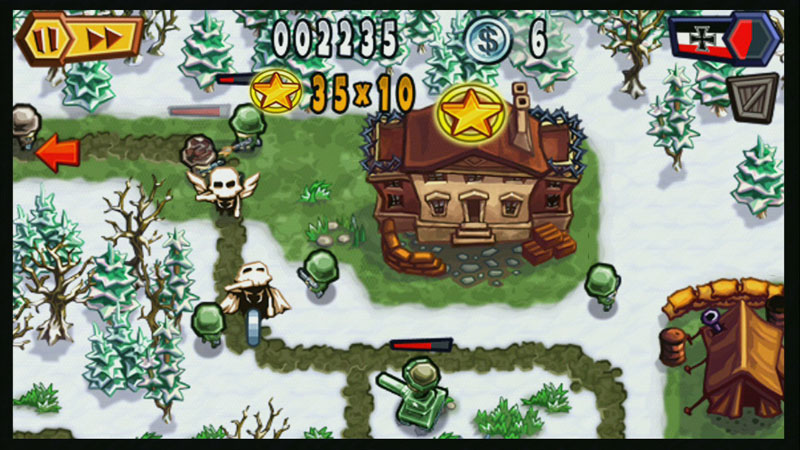 Each side comes with four units, three of which are pretty much the same aside from their visuals. These are infantry, anti-tank, and tank but each side also has a special unit which are not the same at all as the others. USA has frenzied madmen carrying flamethrowers while the German side has blonde pig-tailed medics. Air drops are also possible in the game which will let you bomb an area or drop land mines on roads during battle.

A few other features have been added as well including the ability to speed up the gameplay which is found in almost every other tower defense game out. The ability to fast forward everything is nice so you don’t have to sit there as everything is slowly killed. Also a three star grade system is now in place so just passing each level isn’t the main goal. You will also be treated to three difficulty levels and a slew of upgrades for all your units which you can purchase between battles using the coins you earn in battle. If you want to speed up that process you will have the option to buy coins in-game but that is completely optional.

Guns N’ Glory 2 is slated to be released onto Android (and iOS) sometime near the end of this Summer. We are definitely looking forward to playing it when it comes out.