Settlers of Catan Review – Rule the Island of Catan

As a fan of the Catan board game, this app is one that I have been looking forward to. Soon after it first came out, there was a lot chatter online about what is wrong with the app, lack of features…this definitely peaked my interested. Well I got a copy and have been giving it a run.

Overall Catan is a very good app, great game play and there is a lot of planned updates coming down the line. I have been in touch with the developers about the game and will relay what they told me later in this review.

First off, what is Catan? Catan is an immensely popular German board game designed by Klaus Teuber in 1995. Since then a series of expansions have been developed: Seafarers, Cities and Knights, and Traders and Barbarians, to name a few. The goal of the game is gain points through the creation of roads, settlements, cities; this done by trading and acquiring resources (wheat, clay, wood, wool). There are also development cards you can save that will provide resources, victory points, or knights.

It is not as easy as it sounds. Catan involves strategy, trading, good planning, and a little luck. You start off with 2 settlements and 2 roads and few resources. From there, you work on building and blocking your neighbors. From my experience, the length (time-wise) of a normal Catan board game varies, but will take “forever”.  To win in the board game, one needs to be the first to get 10 victory points.

Catan for Android should be easy for an experienced Catan player to pickup. For me it took a little bit to figure out all of the buttons and screens, but I did not find it to be a big hindrance. There is a lot in the app, and it seems all aspects of the board game have been ported over to the Android game. I found playing the Android version very enjoyable and satisfying. 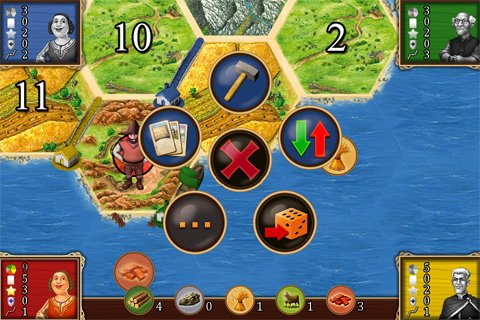 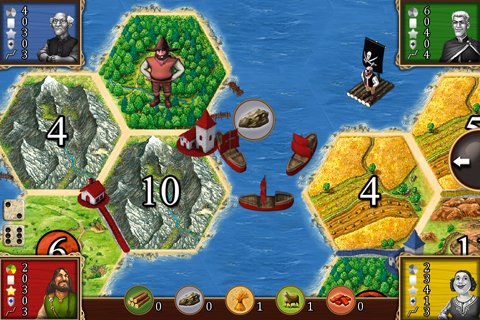 When you purchase the game, you get the basic Catan game, which allows you to play the standard custom game. Within the game, you can purchase an expansion, Seafarers. Purchasing the expansion opens up a lot within the game, I would recommend getting that as well. So, there are two options:

Custom game – here you get 3 board tile options with the standard game, when you add Seafarers you get 13 additional ones. Within the game, you can set the robber, dice, and victory points parameters.

Campaign – here you go through a “story”, a set of 16 scenarios with various board styles. (NOTE: This is only available if you purchase the Seafarer’s campaign.)

I did notice and asked, when purchasing the basic game, you do get a “Seafarers lite” expansion, which includes two scenarios from the seafarers expansion that can be selected in the custom game menu. 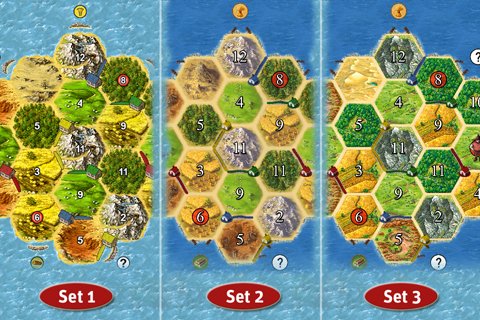 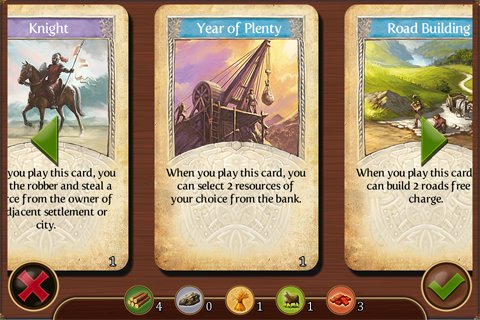 I wanted to spend a few minutes here on the past “issues” that have been raised by fellow Android users. If you search online about Catan for Android, you will find them. Here are the main ones; my take on them and what the developer had to say.

A. Price: To get both games, Settlers and Seafarers, it will set you back about $9 USD. I did some checking and this is same price Apple users are paying. Is it worth it? I think so, there is a lot packed into the game and you will get a lot of play out of it. I have had the game for weeks and am still not even half way through the campaign. Everyone will have to decide on what they are willing to pay but there is a lot here.

B. No multi-player online: This is not a big issue with me but for many it is. I have spoken with the developers and this is in the works to be added.

C. “Does not work well on my Android device”: I ran it on the game on my DroidX and had no problems. Again I spoke with the developer and they said that most serious technical problems are device specific.

D. No tablet support: Again spoke with developers and this is in the works too.

E. “The AI cheats and the dice rolls are not truly random.” From my experience, I would not agree with this statement. The game is not easy and you probably will not win every time but I felt there was a good balance. I spoke with the developers and said this was not the case, they too are huge Catan fans themselves and “wouldn’t want to play a game that cheated on them.”

Conclusion: I really like Catan for Android. It is true to the Catan board game and provides a nice amount of options within the game. Although you can only save 1 game at a time, you can easily play for a while, put it down and pick back up. The Seafarer’s expansion is a great addition and I was told by the developers that the Cities & Knightsexpansion (which was recently announced for the Apple version) will be also coming to Android. So if you are looking for a fun, strategy, building-type game, I recommend you give Catan a try.