Time to Kick Some Aliens ass with Space Shooter for Free

A new game has hit the market, Space Shooter for Free and guess what, it is free! If you like fast paced, shoot em’ up games, then this game is for you. Oh and there is plenty of humor dished out as well for you to enjoy.

A Space Shooter for Free is a nice retro-style shoot em’ up game that is easy to play but hard to master. Took me a number of tries before I made it to a boss, let alone finish a section. The object of the game is simple–kick some alien butt and move on to another section of space and clear it of the bad guys!

The controls are also very well done. You control your ship with your finger-move it on the screen to move your ship and while your finger is touching, you ship will shoot. Take your finger off, all stops. What makes the game hard it the amount of stuff on your screen you need to blow up and dodge.

One of the most prominent features of the game is its sense of humor. Holy cow-it definitely fits the game well. You are Commander P. Jefferson, an alien-hating starfighter at the helm of the mighty USS Eradicator! If you do not mind getting yelled out by the game, it should put a smile on your face. When they advertise, “downloading the Big Ass version” you know you are in for it.

The game is free to play in campaign mode, which gives you 9 galaxies to play in. If you want to unlock the full game (“the Big Ass version”), which includes a survival mode. it is only $0.99 USD. Some other options the game comes with: 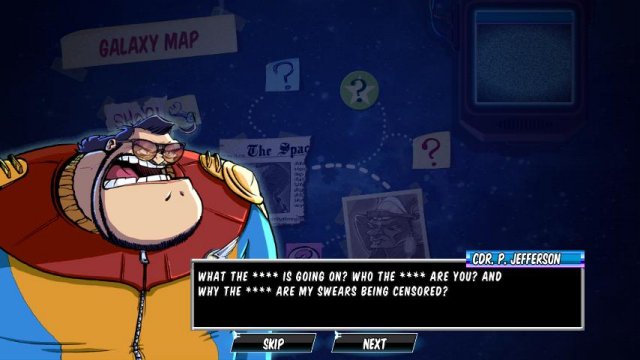 Another cool option in the game is power-ups. As you progress through the levels, you can snag power-ups, which you will need. You can also go to Jenna’s shop to purchase more than 40 upgrades. You can purchase each one with real money ($0.99 USD) or purchase all upgrades at one time ($9.99 USD).  My first reaction, was that seem like a lot of money, so I contacted the developer. Here is what they said:

“The hardest part of A Space Shooter for Free are the first few minutes of play since your ship is not upgraded at all. As soon as you get a few upgrades to your main cannon, things should go much more smoothly. However, it is important to make good use of the many upgrades, power ups, special weapons and hull upgrades. (You receive a permanent hull upgrade every time you beat a mini boss). Proper use of the special weapons  obtained by defeating the main bosses is the key to success later in the game.

It is very easy to unlock all of the game’s upgrades without spending any real money. On my part I like to get the first remnant vacuum upgrade as early as possible so that I can accumulate in game currency as quickly as possible for further upgrades. Once your ship is equipped with serious firepower, you’ll be raking in remnants like crazy just by playing casually.

The real money transactions system is there to speed up the process and to provide a way for those who enjoy the game to show their support. Buying each upgrade individually would cost $14.99 so we believe that a one time $9.99 upgrade all transaction is pretty fair.”

Some good game advice! The game will take some time and power ups are key. I also found if you start in one of the smaller areas (ones with question marks) I fared better and was able to go further.

A Space Shooter for Free really needs to be experienced. Game play, graphics, cut scenes, dialog all make the game enjoyable and a game you can easily play over and over again. If the demand is out there, the developers indicated more levels could be coming. I am not in any rush, since I have not yet got the current ones done yet!

So your orders? Go download this game today mister and get ready to kick some alien butt dirt bag! That is an order!