Shadowgun Review: A console game for your Tegra 2 device

Shadowgun by Madfinger Games is one of those titles everyone is waiting for and wants on their Android device. Right now, when it is released, it will be exclusive to Tegra 2 devices and, should you own one of these devices, you are in for a real treat with this game.

Shadowgun has you playing as John Slade who is hired to infiltrate a mountain fortress of a Dr. Simon who has a legion of mutants, killing machines and other nasty things stashed away inside said mountain fortress, all of which are bent on making sure you end up dead.

When I got my hands on this game back during E3 2011 it was pretty awesome then and not much has changed in the awesome department in this early build we received the other day when it comes to Shadowgun now, it’s still pretty amazing. However, there is a lot more now in-game than there was back then.

The graphics are top notch. If you’ve played Gears of War or similar type games on a console system, you will get the same feeling with Shadowgun and it’s similar theme. It’s big and everything is highly detailed and could easily pass for a console game. Originally, back during E3, I played this on a tablet and now with the build we have in our possession I’ve tried it out on both a Tegra 2 phone and a tablet. The graphics scale quite nicely between the two so you won’t really see any difference when it comes to quality between phones and tablets. It’s all high-quality eye candy for you to enjoy while mowing down enemies while trying to not get shot in the face.

For those of you looking to nab a quad-core device, there will be a version with even more enhanced eye candy for Tegra 3 devices when those start to hit the streets so fear not, you will get your Shadowgun fix as well. As it sits right now though, Shadowgun comes packed with some of the highest quality graphics found in Android games to date right now, especially when talking about this type of gaming genre.

Considering what this site is about, I’ve played a ridiculous amount of games on both phones and tablets. People new to tablets will take a few moments to get a bit better adjusted to the controls of any game being further spread out then what you would find on a phone and for obvious reasons, the screen and resolution is larger on tablets. With that said, the controls on Android phones are solid, real solid.

On Android tablets, if you are not used to playing any sort of shooter game on them whether it be first-person or third-person, you might find yourself reaching a bit too far which could cause a slip up in your gameplay and you may wind up getting shot in the face. This is more of a preference issue though and for myself, I had no problems at all with the controls on my tablets either when it came to playing Shadowgun. They are just as solid as they are on a phone in case you had concerns about how the controls are in this game.

When it comes to the sounds in the game, it is as they would be in any type of shooting game. Plenty of gun sounds going off, random grunts of pain and other ominous background sounds give the game a perfect atmosphere. While some people may find the sounds generic in a sense as there is nothing really original about the sounds themselves, you aren’t playing Shadowgun because of how your feet sound while walking on a metal grate, or perhaps you are. 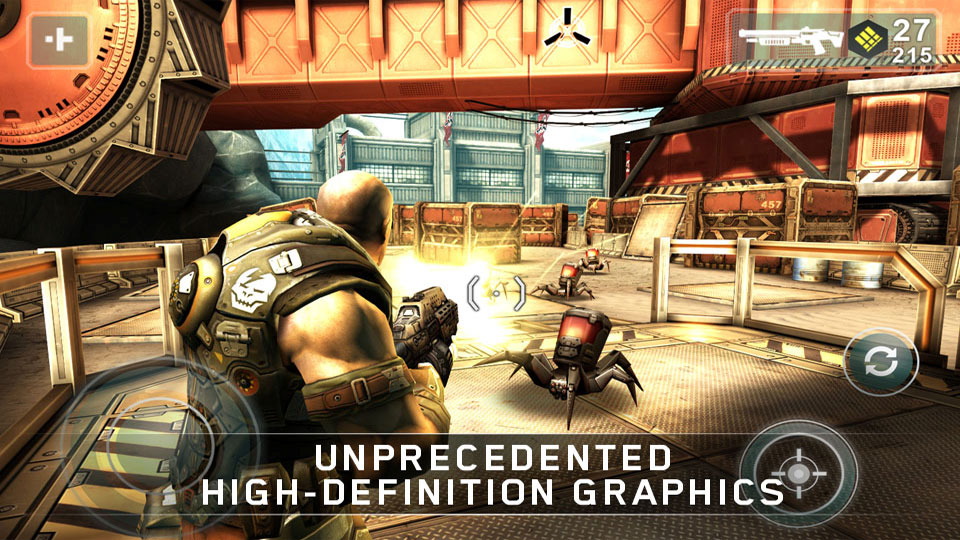 The gameplay is nicely spread out in Shadowgun. While the game boasts roughly six hours of gameplay to be had, right now at least, it could be longer or shorter depending on how good you are with third-person shooters. The pace is just right as well. At times it’s fast and furious while at other times it slows down a bit which actually makes you feel like something is about to come at you which is generally the case.

Fans of this type of gaming genre will feel right at how with the overall feel of the game while you’re playing it. you have a nice selection of weapons to massacre your enemies with, the pace is perfect and you can do things like duck behind objects for cover.

Even though the game comes with around six hours of gameplay, these types of games are always fun to play repeatedly but just in case it gets a bit much after awhile, you won’t be uninstalling it. Why? Because as we mentioned recently, Shadowgun will be getting multiplayer soon which will really bring this to console level gaming when combined with the graphics and gameplay. When the multiplayer drops in a future update, Shadowgun will have unlimited replay value. Unfortunately multiplayer is still being tweaked so it isn’t going to be in the release right away but it will be coming in a near future update.

Madfinger Games has really outdone themselves this time with Shadowgun. If you thought Samurai II: Vengeance was a high-quality game, Shadowgun will literally knock you back when you first see it load up on your Android Tegra 2 device. If I were to make some sort of comparison in terms of Android I would have to say that Shadowgun is to third-person shooters as Riptide GP is to racing games on Android. It is in a league of it’s own and really thins that almost non-existent line between console and mobile games in terms of quality. This is pretty much a must-have game from anyone who owns a Tegra 2 Android device.

While Shadowgun isn’t publicly available just yet, and no real release date has been announced either, we do know it is coming this month thanks to the listing in Tegra Zone. We also now know what the price will be for this awesome title. Eager to know? You will be dropping $4.99 on Shadowgun when it comes out and yes, I said you will be, because it’s that good.