Loaded with Tegra 2 dual core processor technology the G2x is one of the flagship T-Mobile phones going into this holiday season. T-Mobile and LG have made few modifications to otherwise stock Android since it was brought from Korea to the States – the only phone that’s both dual core and stock Android is now available on the market. See how it does after the break.

LGs G2x is an international phone outside of the United states it is known as the LG Revolution 2x. After arriving in Korea first earlier last year its finally come to the States as the G2x with T-Mobile.

The G2x is a unique device. We like stock Android like many hard core Android fans, dual core adds to the G2x delivers both of those together exclusively. Without all the work of HTC Sense, the processor feels as if it’s had chains removed from it even with 100 apps and all their background processes running and with less RAM than HTC competition like the Thunderbolt with 768mb and Motorola competition from the Atrix with 1gb. 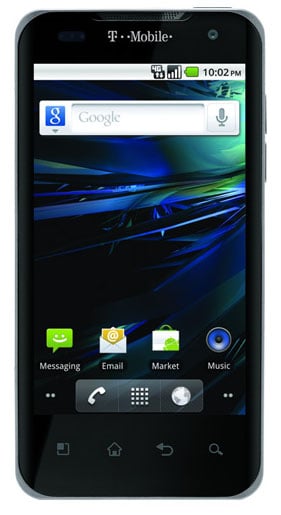 The screen is 4 inches diagonal, 800×480 (sorry, no qHD) and super vibrant. It avoids using extreme brightness to drown out for color that’s not there as seen (and we’ve experienced) on many HTC phones. You can leave the phone on automatic brightness all the time because the phone manages brightness very well. LG has clearly sourced a good panel for the G2x. Viewing angles are superb on the screen and the vibrancy of the display shines at almost any angle. Unfortunately the phone lacks a kickstand which seems to be a massive misstep on such a media heavy device.

Battery life wasn’t particularly impressive but what can you expect from a dual core device as small as this one? We got less than a normal days use which normally includes around three hours of WiFi router on my Sensation about 20 texts per day and around 2 hours gaming. For lighter users battery life shouldn’t be an issue. Battery life when using WiFi hotspot was disappointing, but we did get around 1.2 gb of data from the hotspot before the phone shut off, but in just three hours. If we used less data it lasts longer.

Thankfully LG and T-Mobile chose not to choke this beast of a phone with third party software. It’s a mostly stock experience with some added T-Mobile bundleware, and some of which we’ll get to in this review. There are minor improvements like added Divx playback and HDMI settings along with a few tools that we’ll get into more detail with.

Qik is the same as it ever was, video chatting over 3g or 4g still looks like crap. The T-Mobile apps are all there and better than ever. My Device and My Account display information about the device and your account including data usage on limited plans respectively. The ‘app pack’ app provides some apps T-mobile recommends or already includes.T-Mobile Mall exists for the sole purpose of highlighting content for T-Mobile, which probably receives a kickback for sales. They also use this spot to sell their own apps.

T-Mobile TV is included in the G2x. We’re happy to see that it’s much improved since the days of the HD2. It’s about 99% more stable, and has more content. Unfortunately its offered at such a steep price at $12.99 and puts a huge drain on battery life. The phone died after just three and a half hours of constant watching. We can only recommend this application to people with a long commute by train or similar circumstances.

Unfortunately, I wouldn’t recommend it to anybody because of the catalog, but the option still exists sans a kickstand, a much needed feature on this phone. We happily recommend Netflix with cheaper plans and more content. Unfortunately T-Mobile TV doesn’t have the scale it needs to compete in a hot market right now.

Games played smooth as butter most of the time. We tested Eternity Warriors, which we experienced lag in the higher levels with very strong weapons. We tested Fruit Ninja THD whose framerates stayed solid the whole time we played. We found that the more games opened the slower the phone ran. This is a persistant problem with Android devices in general.

Some games just don’t close without a task manager or knowledge of the Android settings. This problem required a restart a few times over the course of the review. Finally we played around with some live wallpapers such as Light Grid Pro, which lagged the phone down massively, we assume these still don’t use GPU acceleration.