Minecraft: Pocket Edition Review: Build big things while on your way to work

Minecraft: Pocket Edition has been out for a little over a month for all Android devices and since then I’ve been playing with it on my phone and tablets. If you follow Minecraft on any level, you know it’s been in beta for a very long time for the PC although it’s getting ready for it’s final release any day now.

The reason I bring up the PC version is because the Android version is what the PC version was back in and around the 1.5 edition, if not a little earlier than that. If you love to build stuff in Minecraft than the Pocket Edition is like heaven for you. If you are expecting all the bells and whistles that come with the newest version of the PC edition, you’ll have to wait a bit. Right now Minecraft: Pocket Edition is a creative mode game with a lot of the block types and some items available for use so you can create all the structures you want.

The moment you open up Minecraft: Pocket Edition, it’s all about getting your map. You have three options on the main screen: Multiplayer (currently isolated to local WiFi), Single Player and Settings. Multiplayer is currently restricted to local WiFi so you and a friend, if you are on the same WiFi network, can log in and play together. Single player is where you go for some solo play. Your maps are randomly generated just like they are when playing the PC version although it uses the new algorithm to generate the maps. That means famous maps like Glacier and 404 do not render like they used to in either version.

Name your map and if you want, put in whatever seed you want to generate. You don’t have to generate a specific seed, you can leave it blank. Once done you just hit create, your map is generated and you’re off to building your next dream home. 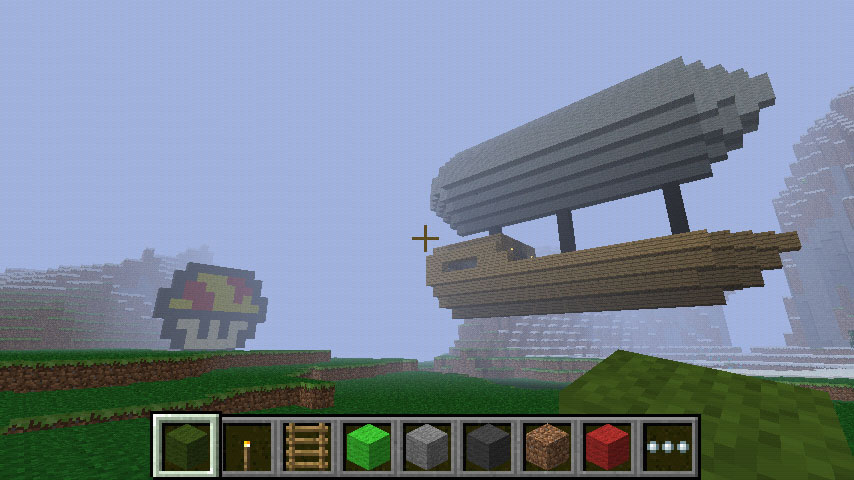 Built in Minecraft: Pocket Edition for the Xperia Play

Once you enter your newly formed map it’s time to build. You are able to use most of the material found in the PC version of Minecraft, although some items are missing like Redstone. There is also no gear like armor and no creepers (or any other monsters for that matter) and no animals. It’s completely creative mode as it stands right now. If you have an Xperia Play, you have all the controls you need to enjoy building. If you have any other Android device, you have your on-screen controls to work with unless you hook up some sort of controller.

Building is relatively the same in Minecraft: Pocket Edition as the PC version. Select what you want to use and start placing the blocks. To dig it’s just a matter of pressing on the screen and holding your finger there until the block disappears. There is a jump button located in the center of the virtual D-Pad on your screen for better jumping although when walking, you’ll automatically go up a block if you run into one.

At first the controls seem a bit awkward and they will take a minute to get used to. Once you’ve gotten used to them though building is a breeze for the most part. One thing that is lacking is the crouch walk so be prepared to fall a lot at first. 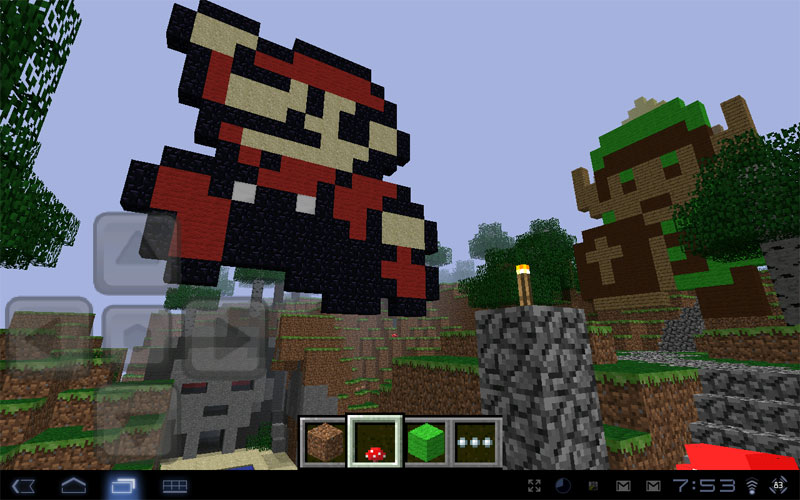 Built on a tablet

The visuals are as they should be and look exactly like the Minecraft you know and love. In fact I think they look better on a mobile device but that is probably due to the resolution they are running at. They just seem more crisp and bright.

There is one thing though that takes away from the beauty of Minecraft: Pocket Edition and that’s the nasty white circle that grows when you’re digging or removing blocks. Perhaps I’m just being picky but it seems completely out of place in the game and doesn’t look good at all.

As I touched on in the game play section of this review, the controls take some getting used to. While Xperia Play owners make off like bandits with their control pad, the on-screen controls take some getting used to and if you are building a big structure, expect to fall a lot at first. Scaffolding is a must. You will benefit greatly, at least right now, by using any sort of game controller to play. If you don’t have one then you will just have to get used to the on-screen controls. Once you do though, you’re all set. 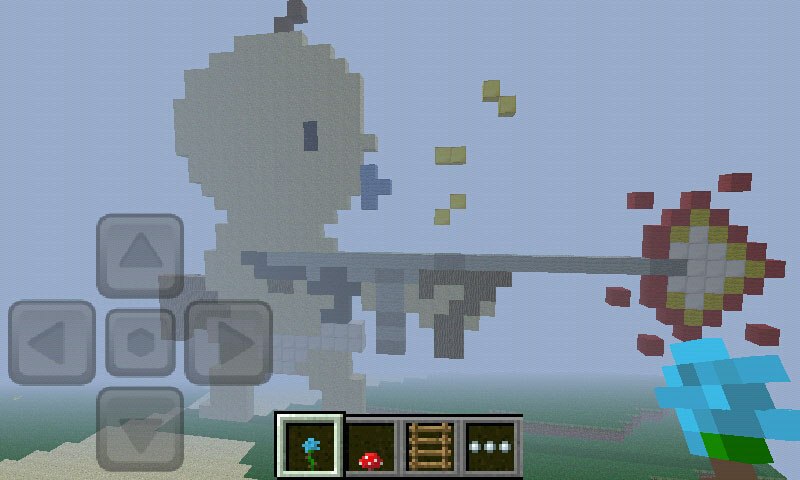 While technically this game should be looked at as a beta due to how scaled down it is, you can’t help but feel like it’s a beta. There are no animals, no monsters, no crafting and most, but not all, of the materials to build with. There is also no nether or any other dimensional land to travel too. It feels really bare. Mojang does have all of this planned, including things like multiplayer and adventure mode, slated for future releases, right now it is just a builder’s heaven.

This isn’t necessarily a bad thing though. If you are really into building structures , whether it’s your first time ever playing Minecraft or you are an expert, this is literally your mobile building heaven. You have free reign for the most part to go nuts on building and it will look good thanks to how great Minecraft: Pocket Edition looks on an Android device. In the end, fans and newcomers to the game will enjoy this and with the future updates planned, this game will only get better.