Stinger Games has been making table type games for awhile now on iOS and have finally decided to make the jump over to Android. With this jump they have released their first title called Team Canada Table Hockey which features Canada’s international hockey team.

At some point you have probably seen, and even played, a table soccer game as those are usually the most common ones around in real life. There are plenty of table hockey games as well although finding those takes a bit more looking. This games brings all of that fun you may have had playing the real table hockey and puts it onto your Android device to enjoy while on the go. 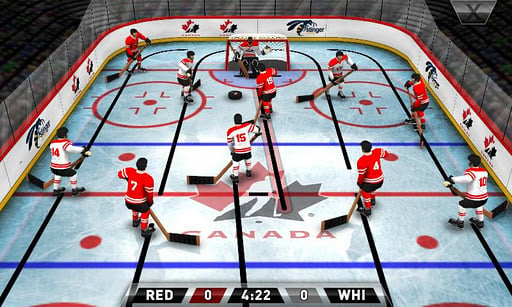 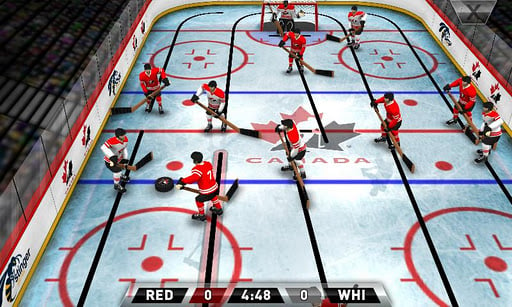 – Nice 3D Graphics
– Bullet Physics provides physics simulation that recreates the speed and challenge of real table hockey, featuring a puck that has a life of its own.
– Improved physics, control and AI
– Challenge a friend to a game of table hockey over Wi-Fi or Bluetooth.
– Play mini-games to hone your table hockey skills

Aside from being able to play against computer controlled AI opponents, you can challenge a friend to a game over bluetooth or WiFi. Since you normally would find a table hockey game in a pub or bar, at least in Canada, this could make for another great drinking game to play with friends, as long as they are hockey fans. Of course you can always play the mini-games by yourself if no one wants to play with you.

You can download Team Canada Table Hockey off the Android Market for $0.99 and yes this is officially licensed which means no word on whether any other teams will eventually make it over in table hockey fashion onto Android. Check out the video above to see the game in action.