YoYo Games have published a few rather popular games on the Android Market including They Need to be Fed and Karoshi. Their newest game will break from the single platform mold and will be a cross-platform social game going by the name of Grave Maker.

Built using HTML5, Grave Maker will be available for all web-based devices for Android and iOS along with Facebook as well. According to the developers, this will be a true cross-platform game meaning that if you start a game on your Android device, you can pick it back up on Facebook or an iOS device (if you happen to own one as well as an Android device for some reason). 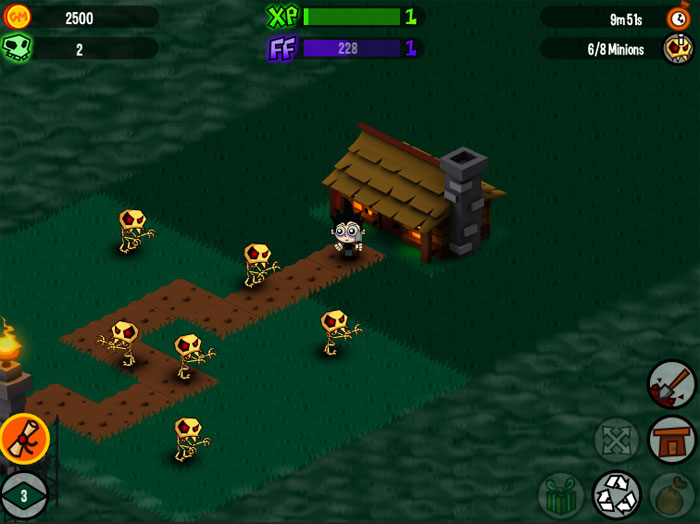 The game itself has you controlling a grave digger who happens to be able to bring the dead back to life. This is great for you except for the fact that this little ability of yours has happened to anger the townsfolk who are bent on ending your grave digging career by killing you. To defend yourself you will have to build your own army made up of the undead. Sounds pretty fun already.

The game is actually available in a beta form that you can test out online over at the official Grave Maker website. YoYo Games has stated that this will be a blend of multiple freemium titles from various platforms like Facebook, blending into one freemium title instead for cross-platform play. No exact date has been given on when this will be released, only that it will be coming February 2012. Full press release below.

London, UK – YoYo Games, the leading portal for user-generated game content, is pleased to announce that Grave Maker, its first ‘true’ social game, is available to demo in beta form on the YoYo Games website. Developed entirely with YoYo Games’ GameMaker platform, Grave Maker runs in HTML5 and will soon be available for web-based Facebook, iOS and Android devices, thanks to easy export functionality in GameMaker: Studio, the upcoming latest version of its widely acclaimed game development framework. A ten level beta demo of Grave Maker is available to try now at: http://yoyogames.com/gravemaker.

Grave Maker is a novel take on the social gaming template, blending several classic Facebook genres into one freemium title. Players take on the role of the grave digger, who has a surprising talent for bringing the recently deceased back to life, much to the enragement of the local townsfolk. With baying crowds knocking on the gates, players must build and manage their graveyards in order to raise an army of the undead capable of fending off the angry townsfolk. Running in HTML5, Grave Maker demonstrates the power and versatility of GameMaker, and, in a first for YoYo Games, Grave Maker will be launched simultaneously on three formats – Facebook, iOS and Android. Grave Maker is truly cross-platform in the most modern sense, with one account for all formats. This means that a game started on Facebook can be picked up on an Android or iOS device and vice versa.

Grave Maker’s cross-platform support is only possible thanks to GameMaker’s HTML5 support and GameMaker: Studio’s easy export pipeline, which allows a single code and asset base to be deployed to a wide range of current devices, platforms and standards. Game Maker: Studio will be launching in early 2012, soon after Grave Maker’s official launch in February 2012.

Stuart Poole, head of publishing, YoYo Games comments: “Grave Maker is a huge project for YoYo Games and in many ways, it represents the culmination of everything we’ve been working towards with the Game Maker package.” He continues, “Grave Maker is every bit a modern social game, but its cross-platform abilities and the power of GameMaker’s HTML5 support means that the player gets the same gameplay experience across all three platforms, with the game in play accessible from any of them, at any time.”

Grave Maker is currently in beta and available to try now at: http://yoyogames.com/gravemaker.