Qualcomm to launch their GamesCommand app at CES 2012, reveals upcoming games too

More pre-CES 2012 news today as Qualcomm has announced that they will be launching the GamesCommand app we previously talked about a few weeks back. This will be the same type of app as Tegra Zone is but instead of showcasing Tegra games it will be showcasing Qualcomm Snapdragon games.

This app will see over 100 games in it’s catalog at the time of launch, some of which are already out while others have not been released yet. Taking a closer look at the screenshot reveals a few games we haven’t seen before and a few others we have been waiting a long time to play. The application will land on the Android Market January 10th, 2012 which is the starting day of CES 2012 and it is a pretty slick looking app. Of course you will have to have a Qualcomm device to be able to use it. 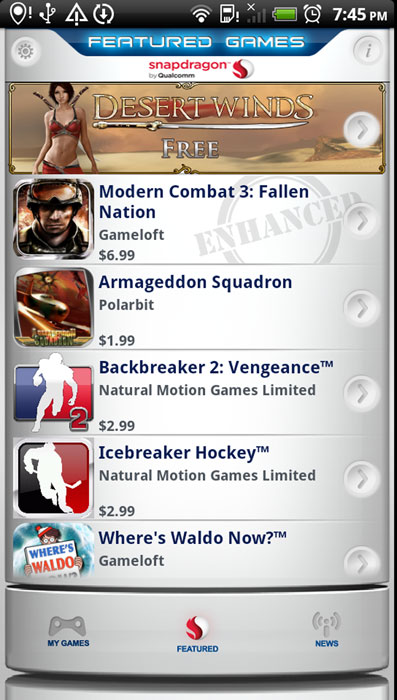 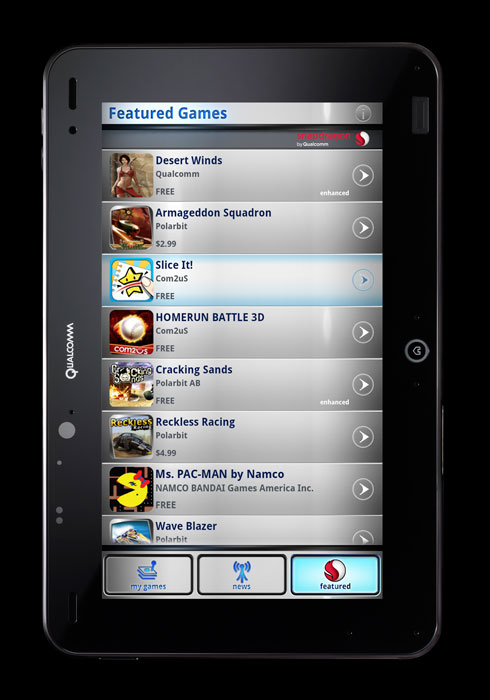 So what are some of the games revealed that will be heading our way? Actually some pretty solid titles, some of which I’ve had the pleasure of testing out.

– Desert Winds: This game has been showcased many times in the past. It is very much like a Tomb Raider type of game but with a bit more action. Graphically this game is pretty awesome. It will be free apparently and we do know it will contain at least three full levels, possibly more. Southend Interactive will be releasing more content in the near future too. This is one title I’ve had the fortunate experience of testing out a few times over the last year.

– Where’s Waldo Now?: Apparently Gameloft is getting in on the action and releasing this game for Qualcomm devices. If you are a fan of Where’s Waldo then you will be happy about this. No word if this will make it to non-Snapdragon Android devices.

– Bunny Maze 3D: Haven’t heard of this game before nor have we seen anything from it but it was good enough to mention in the press release so we are interested to see what this title brings.

– Cracking Sands: Polarbit’s newest racing game we broke news of back in March 2011 with some screenshots. It looks like it will be finally getting a release when this app is launched.

– The Ball: Another pretty awesome looking game with which we really know nothing about aside from the fact it has plenty of eye candy. 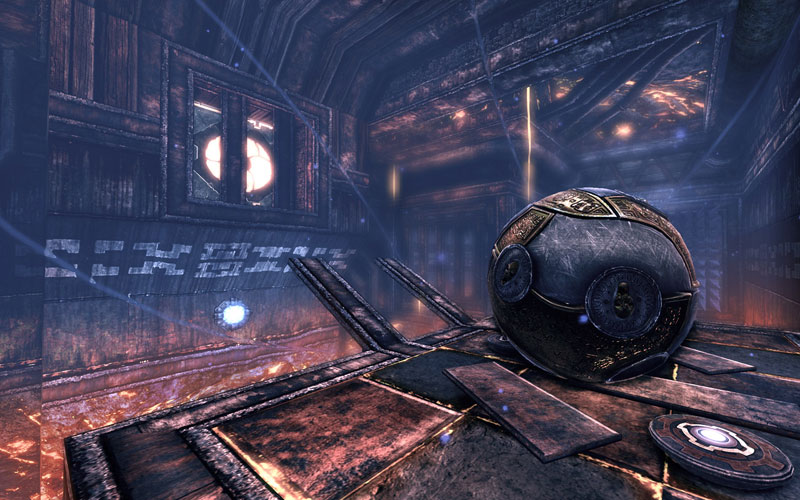 So there you have it, some of the games we haven’t seen yet and others we have been waiting to play. The GamesCommand app will launch for free on the Android Market for Qualcomm chip Android devices next week. You can check out the full press release below for further information.

Showcasing One of the Latest Games Optimized for Snapdragon Devices

SAN DIEGO — January 5, 2012 — Qualcomm Incorporated (NASDAQ: QCOM) today announced that Qualcomm Innovation Center, Inc. (QuIC), a wholly owned subsidiary of Qualcomm Incorporated, is expected to launch the Snapdragon GameCommand™ application to the Android Market on January 10, 2012, the opening day of the Consumer Electronics Show (CES). At its heart, Snapdragon GameCommand will give mobile users a way to quickly discover, organize and access the latest Snapdragon optimized, featured and exclusive games. It will also provide feeds from top gaming news sites to help consumers stay up to date with the latest gaming news.

Snapdragon GameCommand will enable users to easily access and play many of the over 100 Snapdragon™ GamePack featured games on a wide range of mobile phones and tablets. The Snapdragon GamePack includes several titles exclusively available on Snapdragon devices running on Android for a limited time, including “Fight Game Heroes” from Khaeon Gamestudio. “Fight Game Heroes” features head-to-head battles with real MMA fighters, including multiple combat champion and UFC fighter Alistair “The Reem” Overeem. Visitors to CES will have the chance to meet the 6′-5″, 265-pound Overeem in-person and watch as he takes on Qualcomm executives in live rounds of “Fight Game Heroes” at the Qualcomm Booth in the LVCC South Hall, Upper Level, Booth #30313.

Other exclusive games that are accessible to consumers with Snapdragon GameCommand include titles such as “Bunny Maze 3D” from Eyelead Software and “Desert Winds™” from Southend Interactive. In “Bunny Maze 3D”, players help the adventurous Bunny get back his stolen carrots, in a cheerful journey through a magical world. In the “Desert Winds” mini-game players take on the persona of princess Amira as she battles gruesome creatures of the desert to save her people.

“With mobile gaming proliferating at a blistering pace, apps like Snapdragon GameCommand make it easy for consumers to discover and access the most advanced Snapdragon optimized games,” says Dave Durnil, director of advanced gaming at Qualcomm. “With exclusive and highly-anticipated games like ‘Fight Game Heroes’ and ‘The Reem’ Snapdragon mobile gaming is really starting to heat up.”