Way back in November we wrote about Gamelion’s upcoming title for Android called Monster Shooter. Since then the team over there have been working on bringing it to Android now that the iOS version is out. The good folks over at Gamelion shot us a preview build to test out and show you.

Monster Shooter will have you playing as Dum Dum who is generally a nice mild mannered character on his world. Unfortunately he takes a bit of an issue to things one night when his cat is stolen from him during the night by some aliens. Now he is rather angry, armed to the teeth with weapons and is bent on getting his poor cat back while decimating aliens that try to stop him from accomplishing this. It comes with two game modes for you to play: Story Mode and Survival. 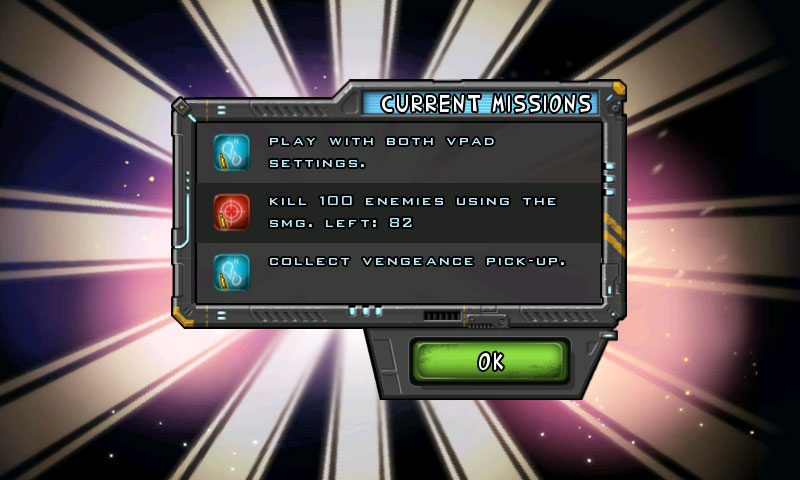 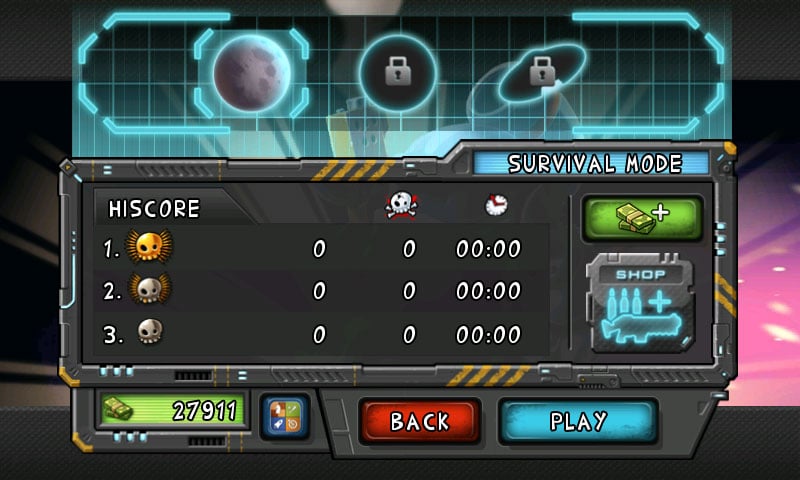 Story Mode follows the storyline of you running around, killing aliens and trying to save your cat. The Survival mode is pretty much as it sounds, survival as long as you can. There are currently three maps for survival mode while Story mode has three worlds, each with ten stages. Aside from those two gameplay modes, you also have side missions to complete. Basically these are like achievements with some being killing a certain amount of monster while others are more technical quests.

For weapons you come with a default pistol type of gun but you have the option to upgrade weapons. There are a total of 8 different guns ranging from a shotgun all the way to a chain gun or plasma gun. You can also buy extra ammo clips, grenades, stim-packs, nukes and other bonuses with the cash you collect in-game. All of the cash to buy these things can be collected in-game but if you are impatient you can always buy extra through in-game purchases. It is totally optional though as everything you can buy uses the cash you collect in-game. No fancy extra in-game currency. 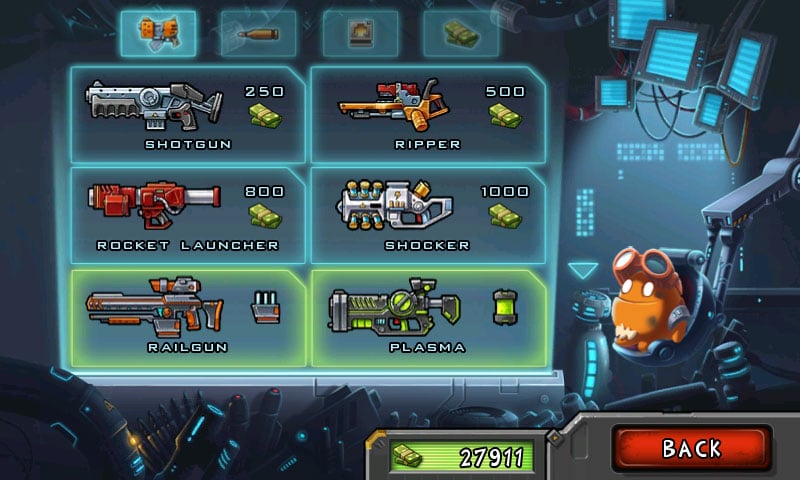 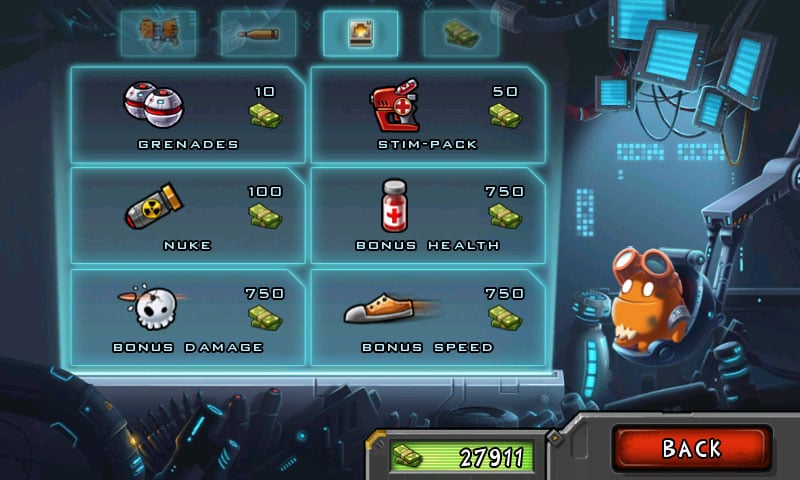 Graphically Monster Shooter is very polished. The visuals are nice cartoon-ish graphics with plenty of effects (both visual and sound-wise) to appeal to your sense of needing some eye candy. When you start up the game, you are treated to a little cartoon intro that explains the story in a bit of a Ren & Stimpy style kind of humor. In fact there is plenty of humor throughout the game as well.

Gameplay starts off getting you used to the game but becomes rather fast-paced as you progress through the levels. Each level has different monsters that you will have to contend with and upgrading your weapons is pretty much mandatory if you want to live long enough to save your cat. Your controls are two on-screen joysticks, one for moving and the other for aiming and shooting. Changin guns is done with a quick swipe across the gun icon in the top right which displays your current gun. You can also gain XP as you kill enemies which, when you level up, gives you more health. 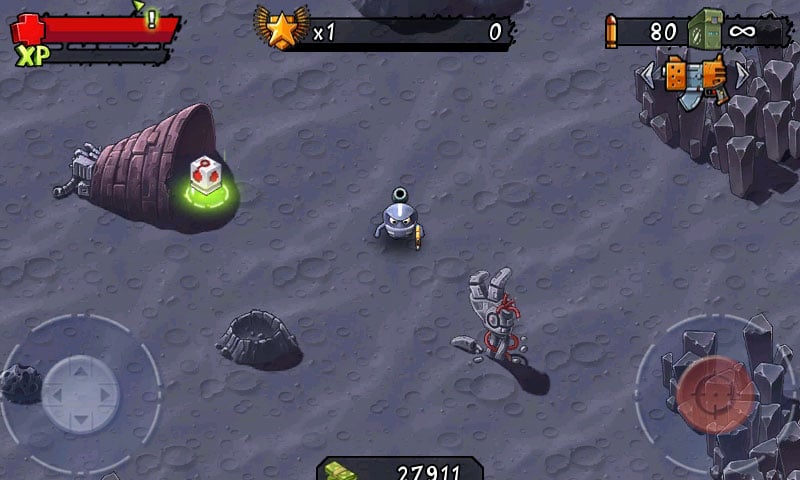 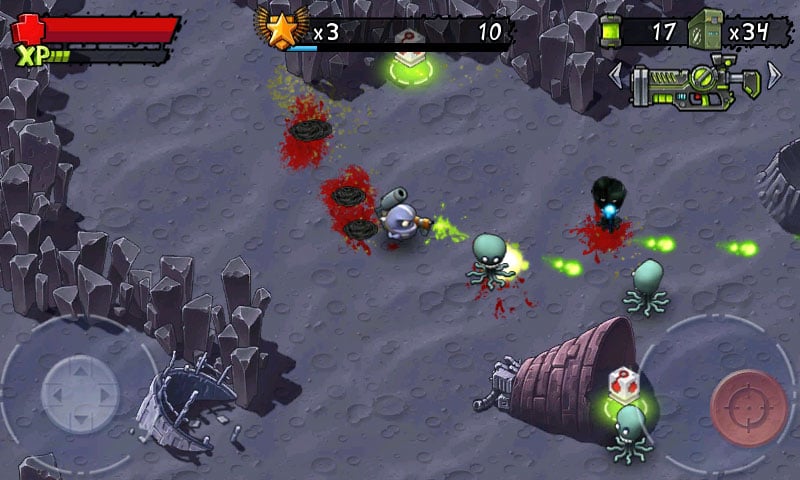 Killing monsters leaves a nice puddle of blood and bones where they once stood and occassionally they drop not just cash but different power-ups and perks as well like health kits and extra ammo. Also, once in awhile, random power-ups of similar nature will appear throughout the stage giving you a fighting chance against the swarms of monsters coming to get you. If you get stuck on a stage you can ‘Teleport’ to the next one by paying a little in-game cash to unlock it, something the iOS version doesn’t include. 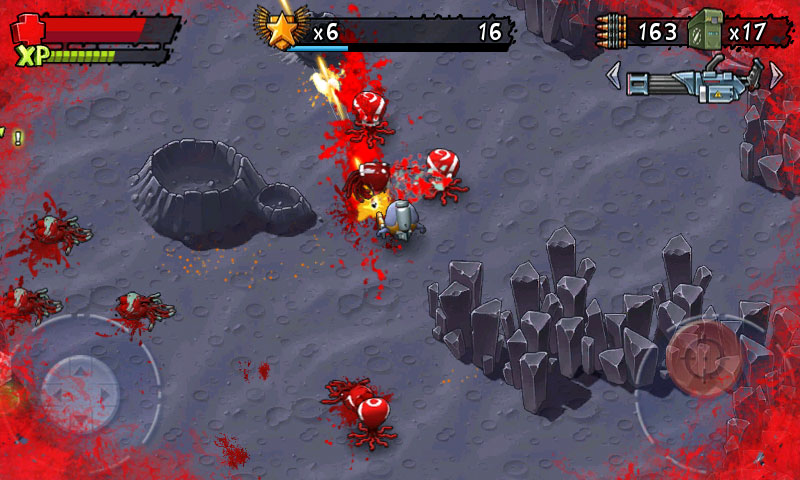 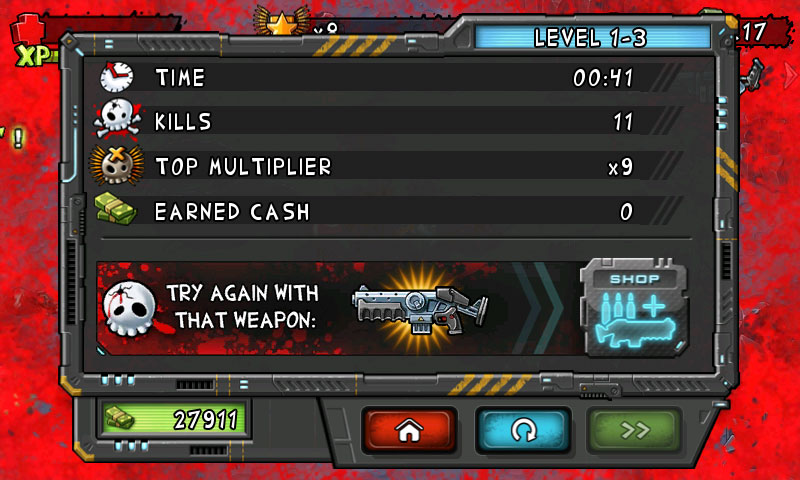 Overall this is quite the fun game both in terms of gameplay and the humor involved with it. For a dual-stick shooter, it is quite enjoyable and the controls react spot on which is nice for a change. It is also good to see a free-to-play type of game done the way it should be. Give the players the option to buy extra cash if they want or let them earn it in-game. Nothing is force fed here. Monster Shooter is just a crazy fun shooter with plenty of humor.

Currently Gamelion has the Android version slated for release onto the Android Market in early February. You can check out the little cartoon intro over in our video section here.