Sonic has been stuck on the rut for the last decade. Aside from the excellent Sonic Advance series for the Gameboy Advance, Sonic Team has been slolwy administrating the blue hedgehog’s death with each release. The consoles games have been hit with mediocre reviews and each attempt to reinvigorate the series only yielded little to moderate success.

Sonic the Hedgehog 4: Episode I for the consoles was the long awaited sequel and return to form that many Sega fans have been desperately begging for. Now the episodic game has finally into your device, but is it worth spin?

In with the old and out with the new.

Like his arch nemesis Mario, Sonic games generally don’t contain a story of epic proportions, and it’s not necessary. What drew gamers from the friendly plumber was Sonics adrenaline pumping speed and open ended platform games. Sonic the Hedgehog 4: Episode I attempts to continue that very same formula. Set after the events of Sonic and Knuckles, Episode I has Sonic’s arch nemesis, Dr.Eggman, yet again attempting to defeat our hedgehog hero. As Sonic, you’re tasked to thwart Dr. Eggmans attempt by journeying through a number of locales known as Zones.

If you’ve grown up with Sonic then expect to dive right in. Four Zones litter the world of Sonic the Hedgehog 4, ranging from steeped hills and pastured grass on Splash Hill, to a frenzy neon lights and deck of cards of the Casino Zone. Each zone provides the classic multiple paths to the finish line. By using pipes, bumpers, trampolines, and anything that Sonic can land his feet on ensures that no two gameplay is ever the same for every player. Collecting 50 rings and jumping into an over-sized ring at the end of the level nets you a Special Stage. These stages pan the camera behind the hedgehog as you navigate through a maze collecting Chaos Emerald, reminiscent of the original Sonic. Prepare for a bit of nostalgia attack. 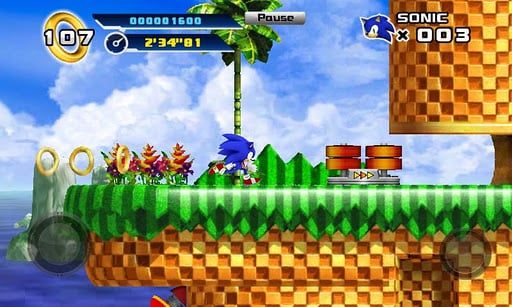 Despite these familiar mechanics, Sega added a welcoming change. No longer will you tied to the linear way unlocking each Zone. After completing the first stage, Splash Hill, players will be whisked to a world map, where they’ll be able to choose which Zone to play next. The inclusion of multiple paths is a welcome change, letting you skip some of those frustrating levels.

Like all Sonic games, the stages are a creature in itself. Unlike most side scrollers, Sonic 4 has a number of obstacles and directions for you to take. Most games have you tied to constantly go to the right of the screen, Sonic on the other hand has you jumping and falling from all directions, left, right, up and down. It can become a bit chaotic and frustrating as at times the obstacle can render your speedy little guy to a complete standstill. Speaking of obstacles, Episode I is littered with them, ranging from bottomless pits to sharp pikes. They appear with little to no warning and sometimes result in a number of frustrating cheap deaths.

The lack of direction can also create a sense of disorientation, a first run through of the later levels can leaves can you guessing on what path to take and with any luck, and you’ll reach your destination after numerous tries. You either enjoy this formula or hate it. 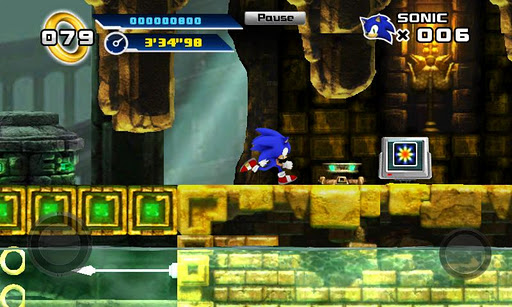 Sonic isn’t as you remembered him. Using the updated version of the Sonic from the string of console games, the blue hedgehog sports the same tricks as well. Along with his devious the sneer and laid back ‘tude, the homing attacks made its way its way as well, allowing you to home into an enemy and then another consecutively. This attack also leads into areas otherwise unreachable by normal route.

Games like Shadowgun and Grand Theft Auto III: 10th year Anniversary provides support for controllers by default. The developers were aware that action extensive games require precise and responsive controls. With Sonic 4, Sega opted out of this feature allowing the dreaded touch control to rear its ugly head. Sonic is a fast creature, but with touch controls he might as well be running in molasses. This issue becomes more evident in the later levels were precision and timing is key for you to finish the level. You will be playing a number of levels numerous times, not because of the difficulty, but the difficulty in trying to tame the beast that is touch screen control. Yes this may be remedied by apps like Sixaxis and Droidmote, but the fact that Sega left out controller support on their action orientated games is a shame. 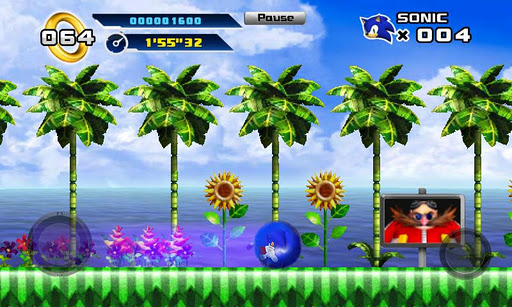 Is it worth paying?

Yes and No. If you’re a huge Sonic fan, complete with plush dolls and slippers, then by all means. Otherwise wait until Sega lowers the price.

Gameplay: On the occasion that the control decides to help, Sonic the Hedgehog: Episode I can deliver some insane speeds, at times it felt as if Sonic was going to leave the camera behind

Controls: Yes its touch controls. While we may tolerate some games that use virtual control sticks, the same for can’t be said for Sonic. Sonic demands tight controls and split timing responses.

Sega’s mascot has managed to deliver the same atmosphere as his earlier iteration. From stage design to music, Sonic 4: Episode I plays less of a sequel but more of a great HD remake. However, with the mobile epidemic that is touch controls, Sonic may well be the slowest kid in the playground.