Dopewars gets a modern remake with a little side-scrolling action

The classic text-based strategy game Dopewars has gotten a more modern day remake in a new game from Grognak Productions called Dope War: Real Deal. Instead of being a mostly text-based game, this new version brings some actual graphics to it.

By graphics we don’t just mean prettier icons for the drugs you happen to be selling. In fact the game has been transformed into a side-scroller where you will be walking around handling your business. The core of the game is still the same, start off as a low-level dealer and make yourself rich buying and selling various drugs without getting busted. There just happens to be a graphical twist to it this time. 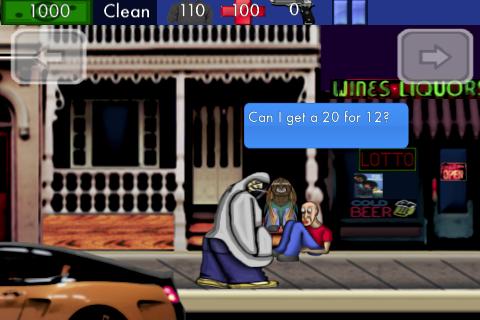 Dope War: Real Deal actually has a lot of the gameplay expanded as well where you can also rob people, buy upgrades for the gear you are wearing or purchase better weapons as well. You won’t be engaging in any action sequences and the game is still text-based when dealing or having to do certain actions, but the additions to the gameplay and bringing graphics/animations into it really liven up this title over the classic one.

If you enjoyed the original Dopewars game from awhile ago, you might want to check this one out. It is available for $0.99 on the Android Market. You can also view the game in action through the trailer above although we do have to warn you, the trailer is NFSW.