ARM had a selection of devices which are sporting their new Mali GPUs and on each device was a different game including the Timbuktu racing game tech demo we wrote about last week. Aside from Timbuktu though, there were six other games being shown off at the table which we will be going hands-on with later today when we sit down with ARM to discuss not only these games but their Mali GPUs. If you happen to have a question you would like us to ask them, now is a good time to include it in the comments below. 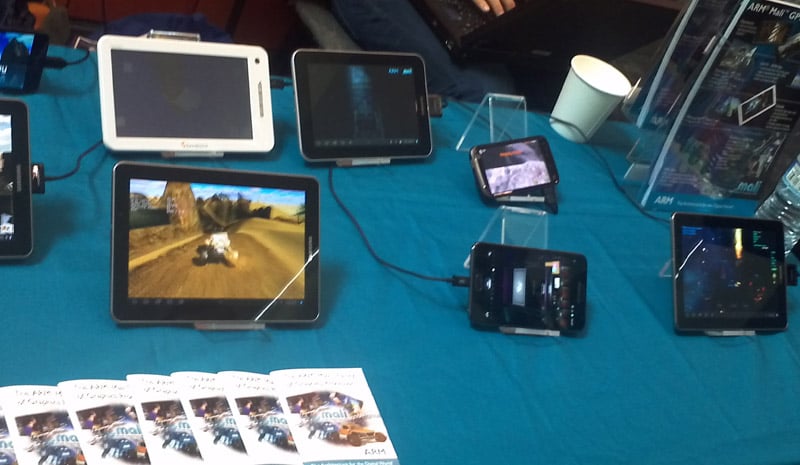 The other six games on display are:

– Geomerics: Powered by Enlighten, this is most likely just a tech demo

– Aztech by Outracks: A sort of post-apocalypse mech game implemented with the new Uno programming suite. Has some pretty impressive next gen lighting and special effects.

– EON Sky by SiXiTS: SiXiTS should be a name you are familiar with as we have reported on their Kickstarter project regarding ROBOTA: Vengeance, a game they want to created with Academy Award Winner Doug Chiang. EON Sky is their other project they are working on and this will be an official game release at some point, hopefully in the near future. This is another fantasy game which we don’t know a whole lot about just yet but it is built with Unity3D and optimized for Mali GPUs (for now).

– Valhalla: Yet another fantasy game with some impressive shaders and soft lighting effects. Hopefully this won’t end up in the ‘tech demo only’ category.

While the details are a bit scare on all of these titles, we will be going hands-on with these and probably more later today so expect some video footage and a lot more details coming your way very shortly.