Here’s what the Play Store has to say about Dungeon Hunter 3:

Hero, you are needed in battle! This is your time to conquer!

Evil has once again flooded over the sacred land of Gothicus. Face your destiny and enter the endless waltz of battle, victory and glory. 16 massive arenas are waiting for you now. Hero, this is your time to conquer!

The benchmark for action RPG games is back in a third FREE TO PLAY installment, and it’s even more legendary than ever!

EXPERIENCE THE DUNGEON HUNTER 3 LEGEND FOR FREE
– Rediscover the thrilling hack ‘n’ slash action gameplay that made the franchise so popular. Epic real-time fighting will provide your daily dose of fun!
– Hack your way through 16 different arenas, each of which can be challenged at 5 different levels of difficulty to provide optimal replay value.
– Choose any arena you’d like to revisit at any time and improve your best score! Or enter our daily challenge to see if you can beat the best score and earn great rewards for your achievements.

TONS OF OPTIONS FOR YOUR PROGRESS AND EVOLUTION
– Deep character customization: Choose from 4 new classes – Warlord, Astromancer, Trickster or Shaman – and for the first time in Dungeon Hunter you can even choose the gender of your hero.
– Over 1,000 items to unlock throughout the adventure or buy them right from the start if you can’t wait. Will you become the most powerful hero?
– Gain experience points with each completed arena and unlock new skills and new fairy attacks as you level up.

Graphically, as you’d expect from any Gameloft HD title, Dungeon Hunter 3 is extraordinary. The graphics are a true example of what your phone really is capable of, rivaling some console games. The audio too is a pleasure and fits the game quite well with a traditional RPG soundtrack. 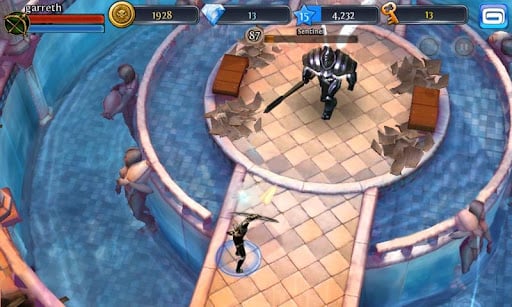 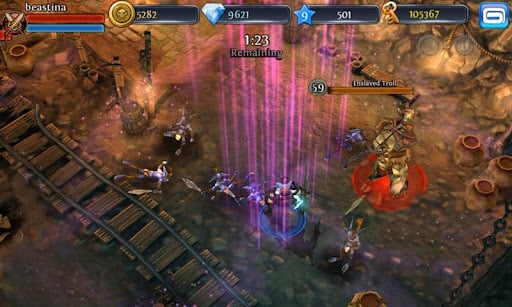 The Dungeon Hunter series, for me at least has always been a great way to kill time, hunting down certain monsters to meet a kill quota, or searching for that rare item that always seems to show itself when you’re about to give up and go to bed. It’s really lived up to its name, hunting in dungeons. Dungeon Hunter 3 however, puts you in various different worlds with multiple areas, in an arena style layout where you battle for survival, and optionally completing mini-tasks such as destroying barrels. For me at least, this change is quite unwelcome, as the game is called DUNGEON HUNTER, not ARENA SURVIVOR.

One thing which I find most annoying is the control layout on the Xperia Play. While the game is fully optimized and makes good use of all the controls available, Gameloft have also tried to utilize “dead space” on the touchpad central area. Simply pressing the center portion of the touch pads lets you change weapons to an alternative set, or at least it should. What I’ve found during my time playing, is that I have to be stood perfectly still and press very very quickly. Failure to press the button fast enough would usually result in changing weapons, then quickly changing back.

Another issue with the same area, is when running around using the touch pads, if you even slightly exit the touch pad circle, you end up switching weapons on the move, which isn’t always welcome and usually results in frantically trying to change back. I’d like to take this moment to thank Gameloft for their nice idea trying to use an area most people forget about, but also advise maybe making the active area a little smaller so people with larger than average thumbs don’t get annoyed so easy. 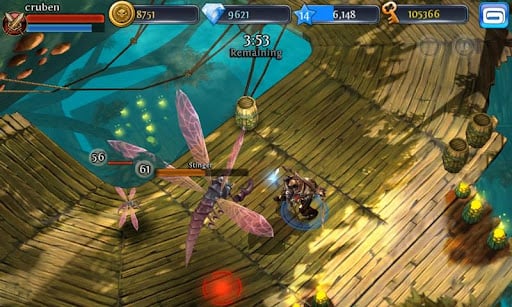 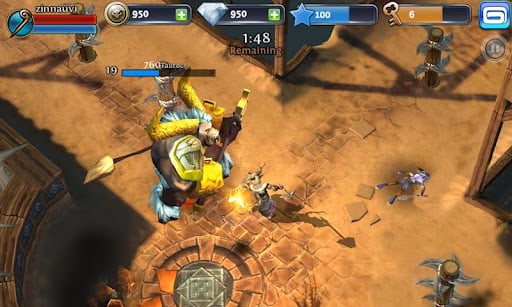 Another area I’m not a huge fan of is how armor and weapons are purchased. In the previous dungeon hunter titles, you could either find your equipment, or buy it from various vendors scattered throughout the world. In Dungeon Hunter 3, all your armor and equipment is neatly displayed in a traditional shop like layout. From there you can purchase or upgrade your items using gold or gems. Gold is obtained from killing monsters or completing levels or bonus objectives, but you never seem to get enough gold to match the level of armor you want, so have to repeat the same levels over and over again to save enough Gems.

However, actually getting enough Gems seem to only be obtainable by completing various tasks with Tapjoy such as installing a semi-pathetic game and reaching a certain level, or signing up to a premium service for a month. While a lot of users probably won’t mind something like that, I personally like to keep my phone clear of useless junk. I could be wrong about the gems, but I haven’t gone far enough through the game to find out if gems can be rewarded when levels are complete. You can also purchase additional gold and gems using the usual Play Store method, which seems to be reasonably priced.

Rant over for now.

On to the good things. As mentioned previously, the graphics and audio are quite suitable for the game. While I have problems with the gameplay, the amount of customization is tremendous. You can choose from 4 different character classes, Warlord, Astromancer, Trickster or Shaman. Also a feature that was missing from the previous titles is the ability to change gender. Not a huge improvement I know, but still its nice to have options. There’s no facial customization yet, but I’m sure that will come in dungeon hunter 4 (sorry guys, no Princess Lea look-alike shaman for you). There are hundreds of items per class to equip, each offering different bonuses and boosts to your stats, or new abilities to crush or confuse your opponent.

So, all in all a feature rich game that has sadly, in my eyes, gone south. I’m sure the changes will make it more of a casual game than a true RPG like its predecessors, but I’m not willing to trade a good story for quicker gameplay.