Farm Invasion USA is similar to those just-keep-running games that everyone seems to be so fond of. Your goal is to harvest corn across two plains (top and bottom). While you’re doing this, there are going to be aliens in your way that need to be squished and/or gunned down. You’ll be doing this until your corn chopper is destroyed either by aliens or by hazards in the field. 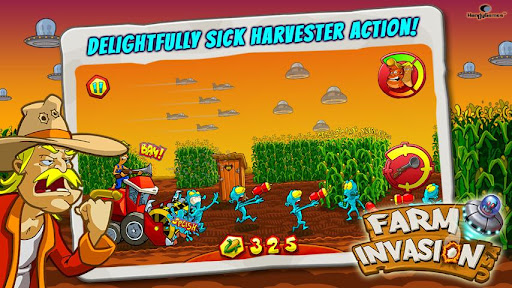 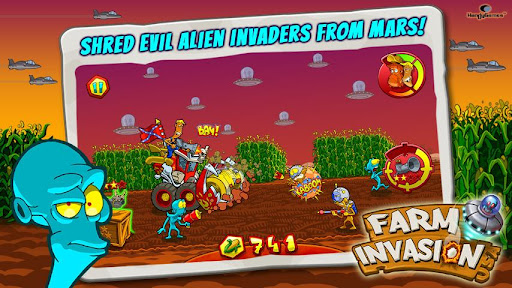 Farm Invasion USA also has its fair share of weaponry. The default weapon is a shotgun, but you’ll find other weapons such as ray guns and rockets throughout each level. There are also power-ups that can either be found in the field or purchased from the store.

A lot of free-to-play games tend to fall flat when it comes to in-game purchases, but Farm Invasion USA makes it easy to progress without spending real cash. You’ll get money and popcorn after each run which can be used to upgrade weapons, buy power-ups, unlock levels and purchase new corn choppers. I’ve played the first level a handful of times and have already accumulated over $3,000. Purchasing new levels only costs $2,500.

I recommend Farm Invasion USA. It looks nice, plays nice and lets you run over aliens.