It seems I may have been a little bit harsh with Gameloft over the last few weeks. I slated the new Dungeon Hunter game, and exposed several problems with games when using Ice Cream Sandwich. This time I’m here to talk about their latest release, Shark Dash.

Before I begin, here’s the Play Store description to catch anyone up as to what the game is about if you haven’t played it yet:

Discover the new benchmark for physics puzzle games! Shark Dash is a highly addictive game that takes the physics puzzler to fun new heights with a unique cartoonish style starring funny little bath toys! Sharkee and his merry band of toy sharks were living happily in the bathtub. That is, until a bunch of mischievous ducks came along to ruin their peaceful little world. These cheaply-made rubber duckies are a little loopy from the chemicals they are made of, and now they’re teasing the sharks, playing pranks like they owned the place! But when the ducks kidnap Sally, Sharkee’s girlfriend, that’s when Sharkee and his buds have had enough! Join a wild journey to tricky bathtubs around the world, save Sally and get rid of the dimwitted ducks!

BATH TIME HAS NEVER BEEN THIS FUN • Amazingly accessible gameplay: Simply drag and release the shark’s tail with your finger to launch him at the ducks! • Dispose of the duckies, grab all the coins, and finish each level with the fewest jumps possible to earn 3 Stars! Use your Stars to unlock new levels! • Not happy with your last shot? Undo it and try it again!

A WILD JOURNEY IN BATHTUBS ALL OVER THE WORLD • Make your way through 96 levels with more to come in future updates! • Visit 4 different environments, from ancient Rome to distant Japan! • Complete tons of missions & unlock loads of achievements!

MEET THE MOST ADORABLE BAND OF BATH TOYS • Sharkee, the hero and fearless leader of the merry band of plastic sharks • Sawy, whose incredible saw nose can cut chains and drop heavy objects on those dastardly ducks • Hammy, who uses his Jump Slash skill to leap through the air and hit ducks from incredible trajectories • Scuby, Sharkee’s twin brother, a calm and meditative toy who likes to swim through the watery depths to take out duckies wherever they hide

Grab enough coins and you can upgrade the appearance of your sharks with cool new skins! 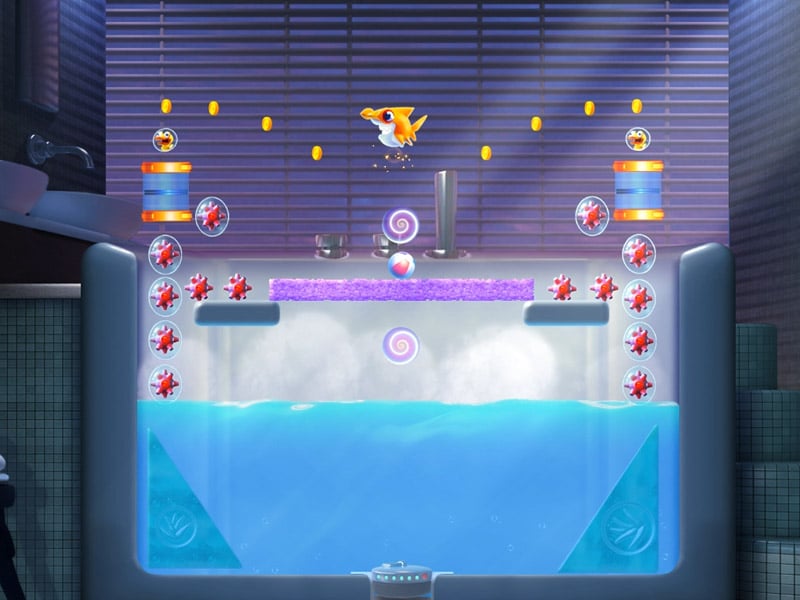 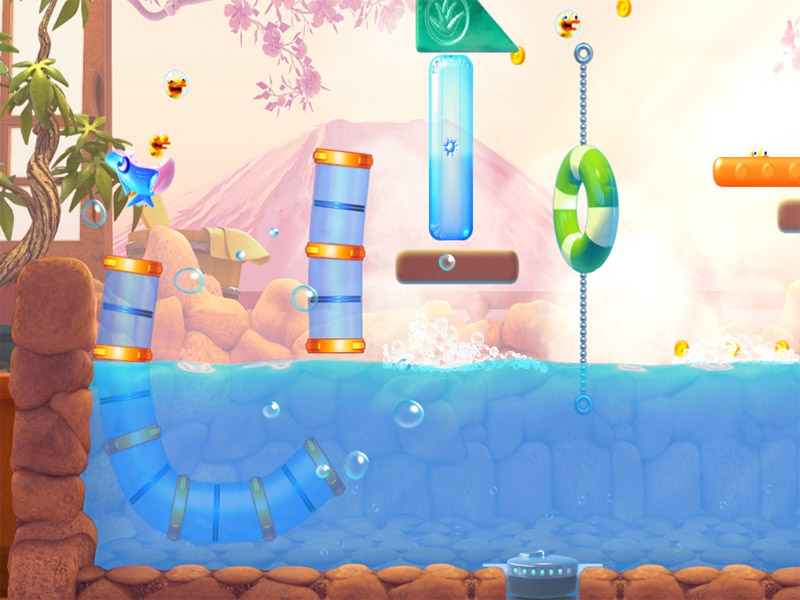 So, as you can probably tell by now, Shark Dash is a physics based game based in a bath tub. The main character is a toy shark, which strangely is quite cute, considering sharks are “deadly” sea creatures. The game itself is based around a damsel in distress story. Your girlfriend has been kidnapped by evil doers, and you have to rescue her. Sounds like the makings of a pretty basic story ideal for a casual game. Make the characters little rubber toys, and place them all in a bathtub, and you have a casual game with a simple story, cute graphics and potentially a lot of fun. Look at Angry Birds, a few pigs steal some eggs and the whole world goes crazy. I think Gameloft are looking to get a similar reaction.

Graphically, Shark Dash is quite simple, which seems appropriate for a casual game. Cute characters also make it child friendly which is a bonus. There seems to be an issue with phones as people in the Play Store comments are saying the graphics look grainy and pixelated on some devices. For me and my Xperia Play, it looks fine. The soundtrack is also quite cheesy like all casual games are. One thing I will shamefully admit, I laughed at the shark shaking his head… Its cute, and the ducks laugh is hilarious too. 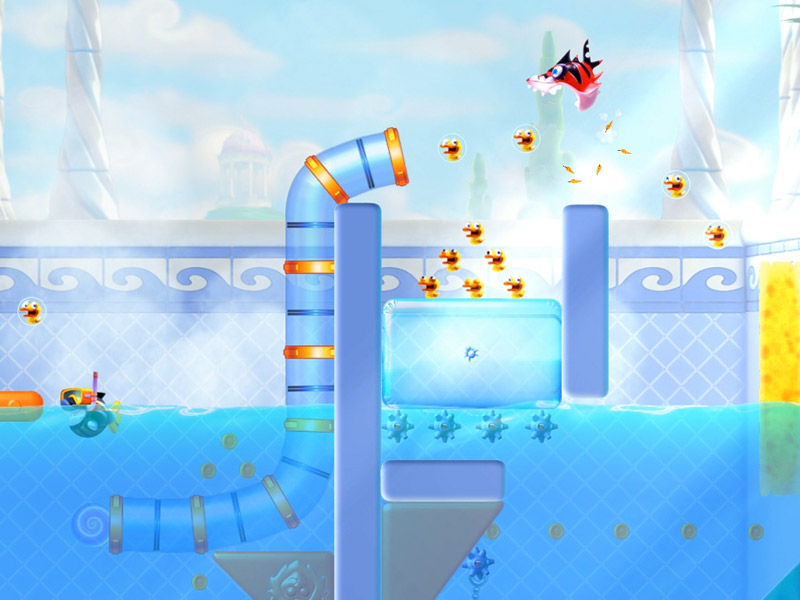 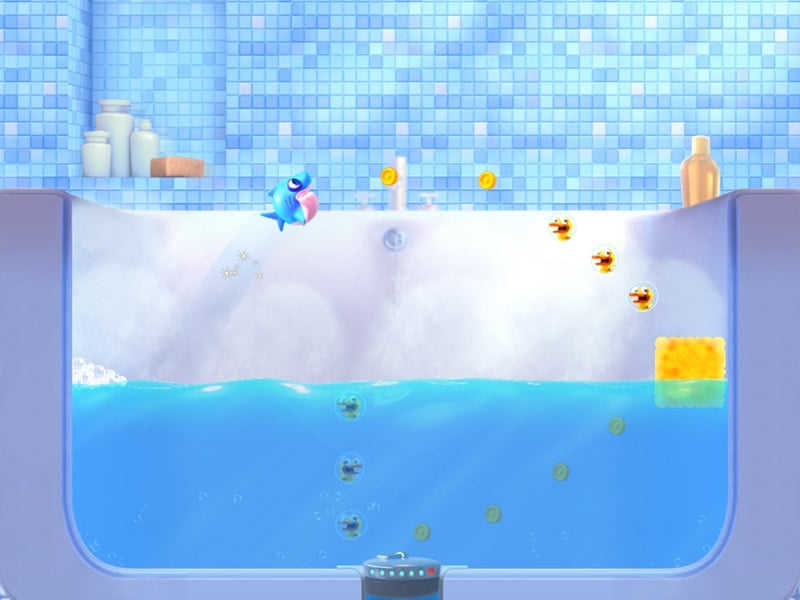 There’s a few things that seem a little too similar to Angry Birds. For example, the level select screen. They look very similar. I’m sure the developers will say it’s a very efficient way of displaying a level selection screen, but I’m not really convinced. Also, another thing that’s too similar in my eyes, the end of level awards, 3 stars! Angry Birds you get stars based on the overall score. Shark Dash you get stars for individual targets such as getting all the coins, getting all the ducks and getting all the ducks under a set amount of moves. Similar, but ever so slightly different like a lot of other games out there.

Obstacles in each level range from soap which sinks, rubber floats which erm… float, and bath salts which dissolve when wet. If used correctly they can all be very helpful indeed. Other tools of the trade include rubber rings to give you a quick speed boost, Bubbles which slow you down, and tunnels to fire you out of like a cannon. Used in the right order, you have one hell of a roller coaster ride. As I’m playing through more and more levels, I’m finding things like bombs and balls to add to the fun.

One thing I don’t quite understand is a premium game with in-app purchases. Surely if you’re going to ask people to spend money in the game, you would let them play it for free and hope they like it enough to want to spend money on it. Instead you have to buy the game, and then buy more coins. I know it’s a cheap game, a very cheap by Gameloft’s standards, but still if you want people to buy stuff in the game, let them play it for free. Another thing which has just popped up on me, is I’ve been asked to rate the game. I paid for it, so if I like it I’m going to rate it and share my views. I don’t want to be reminded

So, it seems I’ve ended up on a little bit of a rant about Gameloft again. In all honesty I am really enjoying the game, but I can’t help but feel like its just another copy of a bigger game, which sadly Gameloft seem to do a lot.