I thought I knew what to expect from the game before I purchased it but I was wrong. You are Mike, alien employee of Demolition Inc. You are assigned the task of destroying cities here on Earth to prepare the planet to become a new intergalactic recreation area for Smack Van Planets. So your job is to fly your city destroying UFO to the designated areas and clean it up! 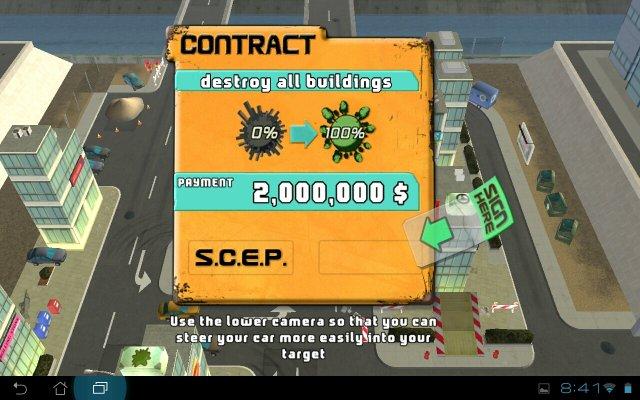 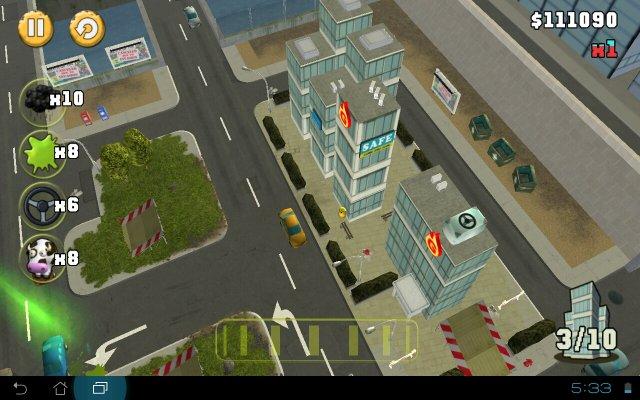 The game has 2 main modes, campaign and rampage. Campaign mode has 6 cities to destroy and within each city 6 assignments to complete. These need to done in order to unlock the next city. Rampage mode is basically free play, you can go to any unlocked city and have fun destroying thing with the skills you have earned.

When you start an assignment in a city, you will be given a task to complete and a number of tools to help you along the way. Some of the tools you earn are oil slicks, tractor beams, and cows. To use a skill, you simple select it and place in the city and sit back and see what happens. In each level, you will need to destroy a certain number of buildings, so you will need to to figure how to maximize the destruction with the tools you have. The more destruction you incur the more money and bonuses you get. 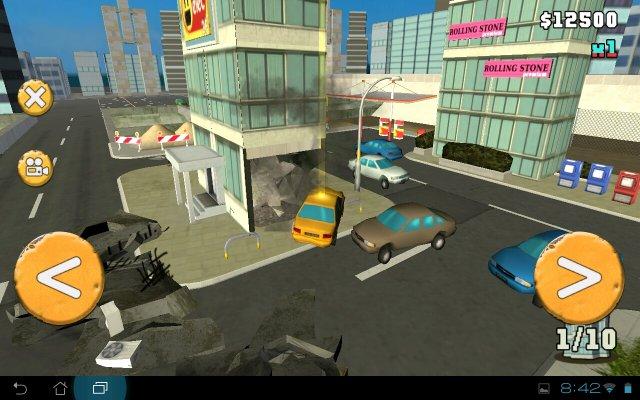 Another cool thing about the game is that it is 100% physics technology. This means that none of the game is predetermined or pre-animated. So ever time you play a level or city, it will be different. Everything can be destroyed in the game. In the THD version, weather is also a factor which helps make things messy. The fun part of the game is trying to see what is the best way to destroy your target buildings. Though it sounds easy, it is not. Since there is no predetermination, you will never know if the tool you use will create the desired effect until you place it. You want the car to go right but it goes left… oh well. I have found myself doing levels over and over trying to get the best score and destruction possible.

The graphics in the game are great. On the bottom of the screen there is a virtual knob which will let you rotate the screen. The game also has pinch to zoom. You main view is from above but you can zoom down to street level, thus you can get a close up of all the destruction you incurred! The game has a number options you can control such as game controls, audio, and video. It also has Open Feint leader boards for achievements.

Demolition Inc THD is a very enjoyable physics-based puzzler game for those with Tegra-based devices. Future updates will be coming out for non-Tegra devices.  The way the game is setup there is a lot of replay potential. Not sure if more cities will be added in the future, but that is something I would love to see. So if you want to help Mike and clean up the Earth for the Society for the Protection of Endangered Planets, pick up a copy of Demolition Inc. THD.