For those of you who enjoy continuous running games like Temple Run and Canabalt HD, there is a new one available on the Google Play store called Skyrise Runner from Ilusis Interactive Graphics. In fact this game takes notes from titles like Temple Run but the gameplay is that of a platformer.

In Skyrise Runner you will be playing as Ciellu, the last of the Skyrunners which is an ancient tribe that protects the Skyland forest. When you start the game, you will be running through the forest, jumping over gaps while collecting gems and straight-arming lumberjacks who are either standing around or cutting down the Skyland Forest’s trees. Control-wise you have a total of two buttons to concern yourself about: the jump button and the button that you use to straight-arm a lumberjack with. 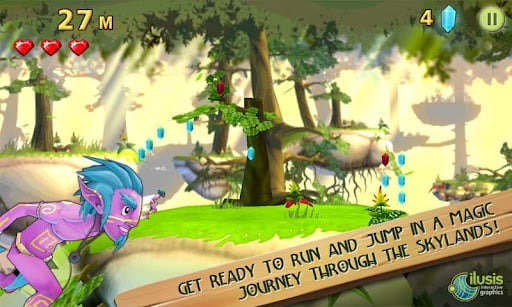 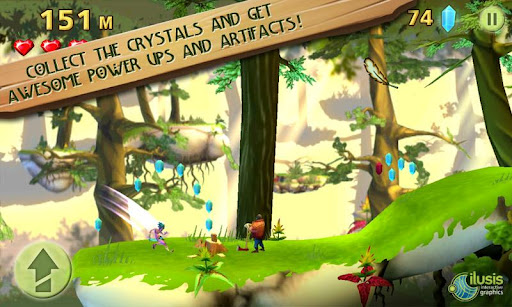 Earlier we mentioned that it takes some notes from Temple Run and this is referring to the ‘Missions’, which are basically achievements, and ‘Equip’, which are essentially the power-up you can buy from collecting the coins as you play the game. You can also buy coins through an in-game purchase if you want power-ups right away instead of earning them while playing.

You can do a double-jump to get over large gaps and some of the power-ups are pretty interesting. Even the gameplay does change up a little such as when you turn into a bird so a short period of time. It seems like the developers were trying to take all the good features from a few existing titles and mashing it into one game. They did do pretty good at accomplishing this feat.

If you are up for trying out a new continuous running game, if you are not completely still addicting to Temple Run or Canabalt HD, then you might want to try this one out. You can download Skyrise Runner off of the Google Play store for free. On a side note: there is a version called Skyrise Runner Zeewe which features integration into the social gaming platform called Zeewe for any of you who actually use that platform.