Another change to the Google Play store has arrived regarding in-app purchases/billing but this time it deals with subscriptions. Developers can now offer in-app subscriptions which users can sign up for. Games for a monthly fee and digital magazine style applications will benefit the most from this.

Games like Order & Chaos are subscription-based games and the inclusion of in-app subscription billing now on the Google Play store could invite more MMORPG games to arrive and go that route instead of freemium. This could also be incorporated into other types of games as well. 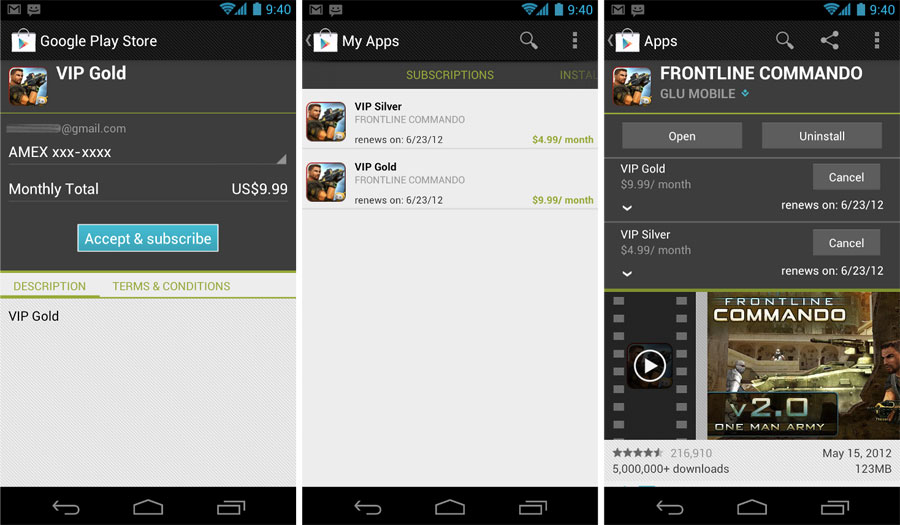 All subscriptions will be auto-renewing for every app and games and product that a user signs up for so you will definitely want to keep tabs on your subscriptions. Developers can set the pricing and billing cycle for their subscriptions and the Google Play store does the rest, just like with in-app purchased. In fact the entire process for the user is almost identical.

Users can cancel their subscriptions at any time just by going to the Google Play store, visit My Apps and looking at your subscriptions. You will also receive a new email each time a billing cycle happens for each subscription. Hit up the link below for additional information and documentation if you are a developer interested in this. Maybe we will see promo codes finally arrive at some point next?