Samsung’s Galaxy Note 10.1 up for pre-orders on Amazon, then gets pulled?

The larger brother of the Galaxy Note from Samsung has apparently quietly slipped onto Amazon for pre-orders already. The Samsung Galaxy Note 10.1 quad-core tablet will roll on out when it is release with Ice Cream Sandwich (Android 4.0) and is apparently going to be available as soon as 3-5 weeks.

Pretty impressive considering there hasn’t even really been any sort of announcement or promotion from Samsung about the Galaxy Note 10.1 going up for pre-orders or even coming in such a short time. The 10.1 Note was also originally supposed to come with a dual-core chipset but it was switched out for a more powerful 1.4GHz Exynos quad-core chipset making the $549.99 pre-order price tag have more value to it than if the 10.1 Note still only had a dual-core inside. 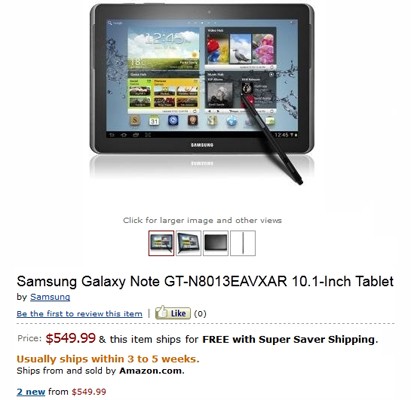 Of course, since it is a Note device, you’ll have a nice S Pen to go along with it. Other specs include the obvious 10.1″ touchscreen running at 1280×800 resolution, 1GB of RAM, 16/32/64GB of storage (depending on model), 3MP rear camera dn 2MP front-facing camera, 3G and HSPA+ compatibility and, of course, a little bit of TouchWiz UI layered on top as per usual.

Unfortunately, those running over to Amazon to the apparent Galaxy Note 10.1 product pre-order page will be greeted with a nice 404 page as it appears Amazon has pulled the listing, at least for right now. We will keep an eye out for when it goes back up. Please Note: Both the above and below Amazon links will go to the 404 page that is now there. This is true for every site who has the product page linked. Keep checking though as we will update this article when it goes live again.