ArtOfBytess, developers of the rather popular GRave Defense series of tower defense games, have release another game onto the Google Play store that actually has nothing to do with zombies, the undead, or killing any of those types of creatures. Hell, it isn’t even a tower defense game!

Switching up gears and style, ArtOfBytess (a.k.a ArtOfBytes) new game is called Icy Joe Extreme and is a winter themed action platformer where you will be playing as Joe who happens to be trapped in a cave and the only way out is to go up. The original version of this game was actually released back in April but this new ‘Extreme’ edition hit the Google Play store about a week ago. 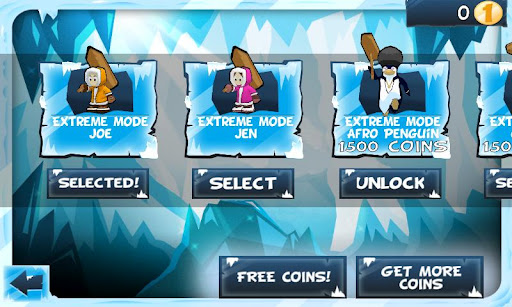 Carrying a big hammer you will have to jump up, platform to platform, while trying to work your way out of the cave. Why are you carrying a big hammer? To smash birds with as they try to stop you from getting out of said cave. You will also be able to unlock new characters to play as like the recently added and legendary Afro Penguin.

Being an ‘Extreme’ edition of the original game means that everything is more challenging and fast paced. For those of you who have the original game already, you can uninstall it if you decide to get this new version as it also contains all the levels from the original as well. If you are ready to smash a lot of stuff as a penguin with an afro, or as any of the other characters, then jump over to the Google Play store and download Icy Joe Extreme. It’ll cost a whole lot of free though.